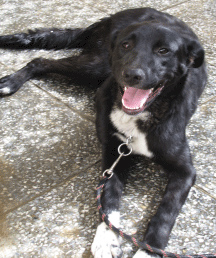 At least one dog flown into Newark Airport from Iraq as part of a stray dog rescue mission was found to have rabies and may have affected other animals, the federal Centers for Disease Control and Prevention announced yesterday. 24 Dogs and 2 cats were on the flight, organized by Operation Baghdad Pups, a SPCA group that has brought hundreds of stray dogs over from Iraq to new homes in America.

The infected dog, Crusader (pictured), was an 11-month-old black Labrador mix that had been taken in by American soldiers in Baghdad as a puppy. (Here's his story.) After arriving June 5th, Crusader fell ill with fever, diarrhea, wobbly gait, agitation and crying, the Times reports. He was euthanized, but the other pets had been shipped out to homes across the country before lab tests showed that he was rabid. The disease, which has been mostly eradicated in U.S pets., is easily transmitted by saliva and kills 55,000 people a year worldwide.

Now the C.D.C. has had to track down the pets and quarantine them for six months. So far none have become sick, but as a precaution, thirteen people have been advised to get preventive treatment for rabies. A C.D.C. vet tells the Times that all pets imported to the U.S. are supposed to be vaccinated for rabies 30 days before they arrive, but the animals in this shipment got shots only days before leaving Baghdad.