Republicans Insist The Kavanaugh Allegations Are Separate From His Judicial Qualifications. They're Not

Thursday’s gut-wrenching Senate Judiciary Committee hearing took a turn for the petulant after Brett Kavanaugh, the conservative Supreme Court nominee multiple women have accused of serial sexual predation, gave his bloviating testimony. The extended temper tantrum seemed to clear the floor for the committee’s Republican contingent—composed entirely of white men—to unleash their rage. Kavanaugh’s spiel derailed a hearing that had previously maintained focus on a central allegation from a witness even Fox News (somewhat begrudgingly) deemed “credible and powerful.” Purpose got blown asunder in all Kavanaugh’s bluster, leaving many viewers to marinate for hours in a frustrating feeling of near-nihilism: Does any of this mean anything anymore? What even is the point?

As sexual assault allegations have emerged against Kavanaugh in recent weeks, one after another after another, some politicians charged with weighing the candidate’s credentials have expressed similar complaints. So many stories about the candidate’s decades-old behavior, all snowballing so close to his contested confirmation, raised suspicions. For example: Alaska Sen. Lisa Murkowski, the rare Republican who occasionally votes against her party, recently expressed concern that the Kavanaugh debate had strayed too far afield. Prospective Justices should be judged on their professional record, she intimated; personal lives are ancillary.

"It's important to remember that the vote is about Judge Kavanaugh and his qualifications," Murkowski recently said, according to Bloomberg. "We have kind of moved beyond the qualifications of the nominee and it has become more about whether or not women who have been subject to any form of assault, of violence, intimidation are to be believed. That's a different issue than whether or not Judge Kavanaugh is qualified."

It’s not, though, not entirely. Although they date back more than 30 years, Kavanaugh’s alleged offenses speak to a meaningful underlying bias—to an inherent assumption that women do not possess rights equal to men, and that their bodily autonomy exists at men’s discretion. 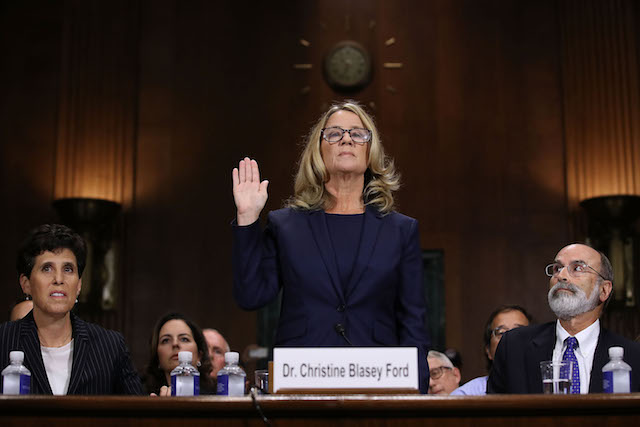 The judge stands accused of drunkenly forcing himself on multiple women in the early 1980s, when he was a teenager. On Thursday, Dr. Christine Blasey Ford, who cooperatively offered the Senate Judiciary Committee a raw, relatable, and at this point, familiar version of the same events she has publicly acknowledged for weeks. Speaking before a Senate panel, Blasey Ford added detail: She recalled how, when she and Kavanaugh were both students at Washington, D.C.-area prep schools, they attended a small house party. When she went upstairs to use the bathroom, she said, Kavanaugh and his best friend, Mark Judge, jumped on her. Aggressively intoxicated, the pair forced her into an empty bedroom. Blasey Ford recounted how they cranked up the music, Kavanaugh covering her mouth to muffle her screams. He pinned her down on a bed, she recalled, “grinding” against her.

“It was hard for me to breathe and I believed that Brett was going to accidentally kill me,” Blasey Ford reiterated. The single most haunting detail, she told the Committee, was the laughter: “the uproarious laughter between the two and their having fun at my expense.” Ultimately, she escaped, but as she told the Senators, she remains “100 percent” certain that Kavanaugh assaulted her.

In furious, red-faced, shouted terms, Kavanaugh denied the allegations Blasey Ford made in her testimony, but it’s not the only claim he’s had to rebut. Deborah Ramirez went to Yale with Kavanaugh, and recently told the New Yorker that, at a dorm party, an 18-year-old Kavanaugh took her drunkenness as an opportunity to shove his dick in her face. “Brett was laughing," Ramirez recalled. "I can still see his face, and his hips coming forward, like when you pull up your pants. ...Somebody yelled down the hall, 'Brett Kavanaugh just put his penis in Debbie's face.' It was his full name.” She said the sustained embarrassment and shame prevented her from forgetting that detail.

Kavanaugh has denied that allegation, erroneously claiming that no one at Yale at the time remembered that incident. (The New Yorker spoke to a number of people who did.) He has also denied the most recent allegations against him, made by government employee Julie Swetnick in a sworn affidavit for the Judiciary Committee. Emphasizing that Kavanaugh was both verbally and physically abusive to women, she said she saw Kavanaugh and Judge orchestrate multiple group rapes. She said they targeted “vulnerable” girls at 10-plus D.C. parties between 1981 and 1983. Spiking their drinks with booze or drugs, the pair allegedly worked to incapacitate these young women so that “trains” of boys could take turns raping them. Without explicitly listing Kavanaugh among the perpetrators, Swetnick said he was present when she became one of the rape victims.

Distilled down to its central elements, sexual assault becomes a power equation: One person exerting theirs over another. If Kavanaugh so blithely ambushed his peers—if he, as Swetnick alleges, habitually lambasted girls with “crude sexual comments ... that were designed to demean, humiliate, and embarrass them” in additional to the physical abuse—and went on to brag about it with his buddies, then we can reasonably draw some conclusions about the way he understood his position in the world. A wealthy young man who spent most of his time immersed in the type of athletic environments that often foster the entitlement and machismo that fuel sexual violence, Kavanaugh acted with impunity. Weighing these allegations alongside the unhinged, entitled fury on display during Thursday’s hearing, it becomes apparent that Kavanaugh is a man who strongly believes that he holds an implicit right to the things he wants. Then as now, he deserved to do what he wanted, when he wanted, to whomever he wanted. Women, meanwhile, factored into his vision as bodies to be conquered. Allegedly, of course. 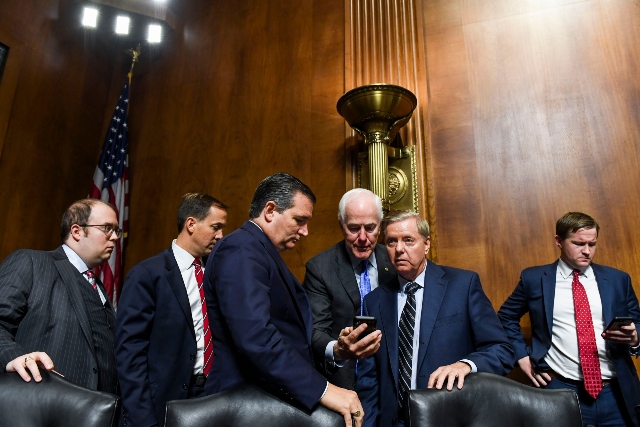 Even if you’re not prepared to go that far, I think we can agree that one unifying theme in his behavior was a disregard for women’s bodily autonomy, and given the cases expected to land before the Supreme Court in coming months, that view should be considered as Senators probe his qualifications.

Some have argued that an adult should not be judged by their teenage actions, because people change. Has Kavanaugh changed? Certainly, his stormy testimony on Thursday, which saw him interrupt and shout down those who questioned whether or not he deserves to sit on the highest court in the land, sounded like the belligerent teen, who flew off the handle when women told him “no.” But if we judge purely from his record, we see that same disrespect for women’s independent agency preserved over many decades.

Take Kavanaugh’s recent vendetta against a pregnant immigrant teen seeking an abortion on U.S. soil. The Trump administration stepped in at the last minute, shuffling Jane Doe into a religiously motivated, anti-choice crisis pregnancy center instead. The efforts to deny the young woman an abortion prompted 2017’s Garza v. Hargan, which eventually made its way to Kavanaugh’s D.C. circuit court. Going against his colleagues’ opinions, Kavanaugh spoke for the group: He issued an order that both acknowledged Doe’s constitutional right to abortion under Roe v. Wade, and imposed extra restrictions that shoved her right up against Texas’s time limits on the procedure. The rest of the court wasted little time overturning that decision, with which they did not agree in the first place, compelling Kavanaugh to throw a hissy fit in the form of a dissent. He castigated his peers for allowing this young woman to make “a major life decision” without his input, without the government’s input. He cast doubt on her capacity to make up her mind alone. He went out of his way to block her, bent on the conviction that he and his cohort of male cronies know best, and that men reserve the right to the last word when women undertake decisions about their own lives.

The same prioritization of Kavanaugh’s patriarchal, Christian convictions would appear to influence his opinions on other aspects of women’s reproductive rights. Asked whether or not women should have free access to birth control—in other words, whether or not they should be able to dictate if and when they have kids—he has seemed to side with conservative religious companies that refuse their employees certain prescriptions on the grounds of third party objections. These are questions that, if he were appointed to the Supreme Court, Kavanaugh would likely help settle. So far, he has not demonstrated a readiness to separate his decades-old belief that men are best positioned to decide what happens to women’s bodies from his professional dealings. This aspect of Kavanaugh’s character doesn’t seem to have changed since high school. Indeed, getting away with his behavior may only have emboldened his sense of entitlement.

#brett kavanaugh
#christine blasey ford
#supreme court
#original
Do you know the scoop? Comment below or Send us a Tip