Republican Presidential Elector Says He Won't Vote For Trump, Urges Others To Join Him

A Republican presidential elector in Texas has written an impassioned op-ed in the NY Times explaining why he will refuse to vote for President-elect Trump on December 19th. Christopher Suprun, a former FDNY firefighter who served on paramedic who volunteered on 9/11 and now works as a paramedic in Texas, argues that "presidential electors have the legal right and a constitutional duty to vote their conscience." An excerpt:

Since the election, people have asked me to change my vote based on policy disagreements with Donald J. Trump. In some cases, they cite the popular vote difference. I do not think president-elects should be disqualified for policy disagreements. I do not think they should be disqualified because they won the Electoral College instead of the popular vote. However, now I am asked to cast a vote on Dec. 19 for someone who shows daily he is not qualified for the office.

Fifteen years ago, as a firefighter, I was part of the response to the Sept. 11 attacks against our nation. That attack and this year’s election may seem unrelated, but for me the relationship becomes clearer every day.

George W. Bush is an imperfect man, but he led us through the tragic days following the attacks. His leadership showed that America was a great nation. That was also the last time I remember the nation united. I watch Mr. Trump fail to unite America and drive a wedge between us.

Suprun is the first Republican elector to announce that he will not cast his vote for Trump; he joins at least eight other Democrat electors who are planning protest votes for a candidate other than Clinton, in a growing effort to persuade Republican electors to join them in revolt.

In his essay, Suprun floats the possibility of a compromise Republican alternative to Trump, naming Governor John Kasich of Ohio as an alternative. (Kasich's top political adviser recently told Politico, “There’s no question Trump won enough votes in the states to receive over 270 votes when the members of the Electoral College meet. I’m sure the [Electoral College] will affirm this when it gathers later this month.") Since the op-ed appeared on the Times website last night, Suprun has been bombarded on Twitter by supporters and detractors, and seems committed to engaging with them: 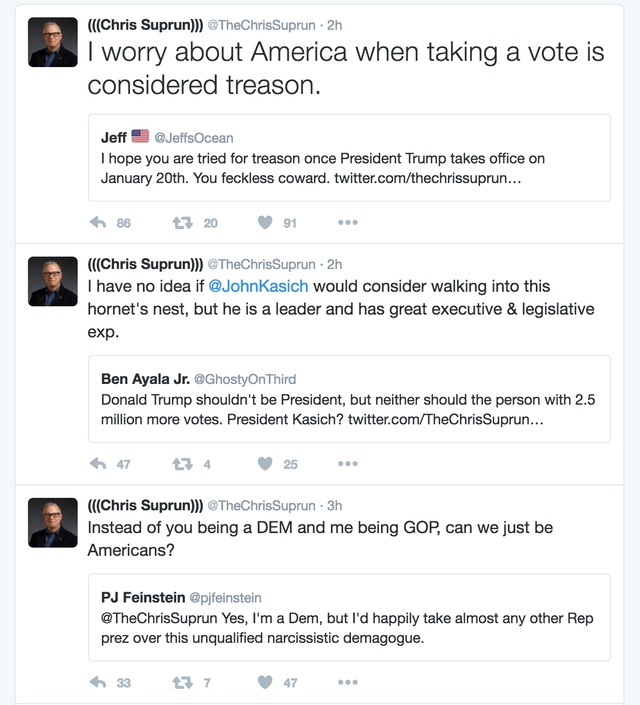 306 electors are pledged to vote for Trump, and 232 are pledged to Clinton. A candidate needs 270 electoral college votes to win, which means at least 37 Republican electors would need to vote for a Republican other than Trump (assuming they can't stomach voting for Clinton). If that happens, the decision goes to the Republican-controlled House of Representatives, which would choose the next president from the top three vote recipients in the electoral college. The faithless electors' theorize that the House might be swayed to stop an obvious sociopath from obtaining nuclear weapons if presented with a Republican alternative.

The establishment consensus (which has been unfailingly correct in everything so far this year) is that all of this is highly unlikely, though the electoral college did revolt twice in the 19th century. Michael F. Cannon, a "resident scholar" at the conservative think tank Cato Institute, also thinks this effort is a desperate pipe dream—unless Clinton comes forward to urge all of her Democratic electors to vote for a Republican compromise:

If Clinton announced she is releasing “her” electors and asked them to vote for a credible Republican alternative, she could plausibly deliver all 232 Democratic electors. She might even secure similar pledges from House Democrats in the event the election went to the House.

Naturally, most rank-and-file Democrats would consider the idea of backing a Republican for president abhorrent. Even so, the electoral college presents a most interesting test for Clinton and her party.

If Democrats believe Trump poses a unique threat to the republic, and signal this is not okay by reaching across the aisle to marginalize and stop him, then win or lose, Democrats could legitimately claim they put partisanship aside for the good of the country.

If Democrats believe Trump poses a unique threat yet don’t support another Republican in the electoral college, it will indicate that Democrats see Trump as no different from any other Republican. And if Democrats treat Trump as normal, they will be complicit in normalizing his behaviors.

Meanwhile, prominent Harvard University law professor Larry Lessig has joined a California-based law firm to offer free legal support for any so-called "Hamilton Electors" who revolt. In some states, electors face the threat of small fines for voting against the candidate to whom they're pledged. Politico reports that Lessig is also launching an anonymous online platform for electors to discuss "stopping Trump from taking the White House... [and] help electors coordinate to determine whether they’ve gathered enough support to stop Trump from winning the presidency."

“It makes no sense to be elector number five who comes out against Trump. But it might make sense to be elector 38,” Lessig told Politico. Lessig has previously argued that the framers intended the electoral college as "a circuit breaker" and that electors were intended "to be citizens exercising judgment,  not cogs turning a wheel."

With 13 days to go until the Electoral College votes to make Donald Trump president of the United States and Commander in Chief of the armed forces, Brooklyn resident Jeff Strabone has launched a customizable mail merge website that aims to help people send their own "signed postal letters to the members of the Electoral College from states won by Donald Trump to ask them, respectfully, not to vote for Trump." Strabone says his website has addresses for approximately 260 Trump-pledged electors, and estimates that it would take an average Trump-panicked individual under two hours to send pre-written letters to all of them.

#election 2016
#electoral college
#president-elect trump
Do you know the scoop? Comment below or Send us a Tip