Two days after Mayor de Blasio formally asked President Obama and Congress for up to $35 million in federal restitution for security outside traffic-snarled White House North, Congressional Republicans indicated that they are interested in fronting only a small percentage of the City's ask. A stopgap federal spending bill introduced Tuesday night includes $7 million for overtime incurred by state and local law enforcement protecting President-elect Trump between the November 8th election and January 20th inauguration.

"New York City taxpayers should not be on the hook for 80 percent of the national bill to protect our President-elect and his family's residence," the mayor said in a statement Wednesday. "We are counting on Congress to step up in the coming months to pay back what it owes our city. This is a national responsibility and the burden cannot fall alone on our city and police department."

Earlier this week Mayor de Blasio told reporters that he has also been in touch with the incoming administration about reimbursement for the NYPD's Secret Service assistance; that he had a "good conversation" with incoming Treasury Secretary Steve Mnuchin. However, "This is the time now to really lean in to nailing down the reimbursement, particularly for the period up to January 20."

The cost of protecting Trump, a known homebody, has been estimated at about $1 million a day (though Mayor de Blasio's $35 million ask comes to $500,000 per day). And while the mayor has been hesitant to speculate about how much time Trump might spend in his gilded Fifth Avenue suites after inauguration day, a petition circulated by members of the City Council points out that Melania Trump's decision to stay in Trump Tower while Barron Trump finishes school will come at no small cost. City Council Speaker Melissa Mark-Viverito and Council Member Dan Garodnick have called on Trump to use federal funds to cover his security detail, citing a potential NYC taxpayer burden of more than $1 billion over the next four years.

The speaker called Congress's proposal "outrageous" on Wednesday. "New York City cannot single handedly shoulder the staggering cost of protecting the President-elect and his family," Mark-Viverito said in a statement, adding, "The President-elect and Congress must commit to repaying NYPD, the taxpayers, and our City. We will not accept anything else.” 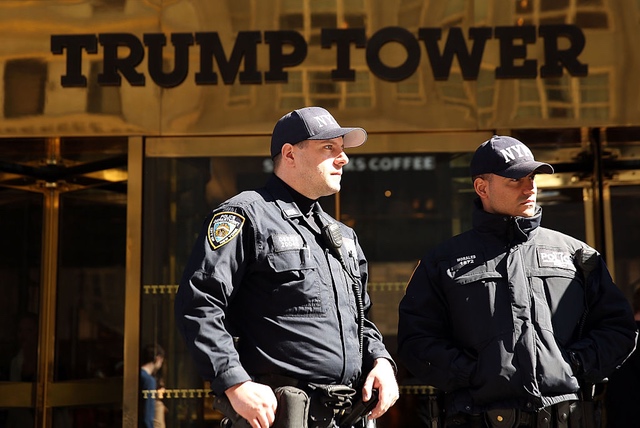 The Hill reports that because the GOP's new spending bill doesn't specify New York, the proposed $7 million could also be applied to security during Trump's thank-you tours and rallies ahead of inauguration day.

New York Democratic Congresswoman Carolyn Maloney said she would challenge the bill. "I am extremely disappointed that the Continuing Resolution to fund the federal government does not fully reimburse the people of New York for the unprecedented security costs," she said.

NYPD Deputy Commissioner John Miller has also been explicit about the need for reimbursement. This week, he traveled to Washington for a press conference with six Congressional Democrats representing New York who are urging President elect Trump to move out of Trump Tower after his inauguration.

"There's no implied message here that if we don't get this [$35 million] we’re going to do any less security than is required,” Miller told reporters. "But it’s about doing the right thing for the City of New York and its police department."

During a November NYPD press conference outlining 'unprecedented' security measures around Trump Tower, Mayor de Blasio said he was confident the feds would help cover the cost of protecting the President elect, including overtime for NYPD officers. "We know for a fact, whether it was protecting foreign leaders or the President, there has been reimbursement [in the past]," he said. However, "This [task] makes all of those seem quite small."

"The NYPD is carrying a burden for the entire nation," he added.

#Congress
#mayor de blasio
#security
#Trump Tower
Do you know the scoop? Comment below or Send us a Tip