As the nation commemorated the 50th anniversary of Bloody Sunday and the historic Selma civil rights march this past weekend, a different sort of scene was unfolding yesterday in downtown New York City.

At City Hall, hundreds of mostly Chinese American immigrants gathered en masse at what was billed as a “Support Your Local Police” rally to protest in support of NYPD Officer Peter Liang, who was indicted a few weeks ago in the killing of Akai Gurley, an unarmed man who was walking down the dark stairwell of his apartment complex in East New York.

Clutching American flags and homemade signs, a large crowd began arriving hours before the rally officially began, and by 1:30 p.m., the line stretched all the way around the park. (It was later estimated that upwards of 1,000 people attended.)

Many of the other protesters others echoed Lin, repeating the messages that have been parroted in the Chinese language press that the indictment was a form of discrimination against the Chinese community and that Officer Liang is being scapegoated because he’s not white. 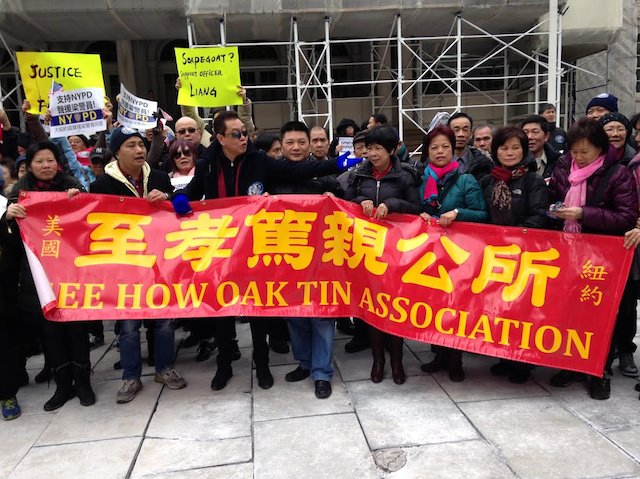 Much has been written about how the Chinese community is “divided” over Peter Liang’s case. But yesterday’s rally highlighted an aspect that hasn’t yet been widely acknowledged. Behind all of this organizing in the Chinese American immigrant community, are an array of individuals (mostly white) and organizations (Republican and conservative) who are working hand in hand with the more conservative elements of the Chinese American community to push their own pro-police, anti-reform agenda.

Joseph Concannon, the lead organizer of yesterday’s rally, is one of those people.

A retired NYPD captain, failed City Council and State Senate candidate, and the current vice president of what has been described as the “Tea Party-aligned” Queens Village Republican Club, he and the organization he founded, the Square Deal Committee, have been some of the main organizers of a series of pro-police rallies that have been held in NYC during the past few months.

“Someone has turned the racial arsonists loose in this country,” he told me after the rally. While he admitted that “there may be racial bigotry still going on” in police departments throughout the country and in New York, Concannon believes the real threats to our city are Bill de Blasio and the people that he calls “professional agitators.”

“He set the radicals loose on the city of New York,” Concannon said of de Blasio. “They had been put in check for 25 years, and now look what you have.” 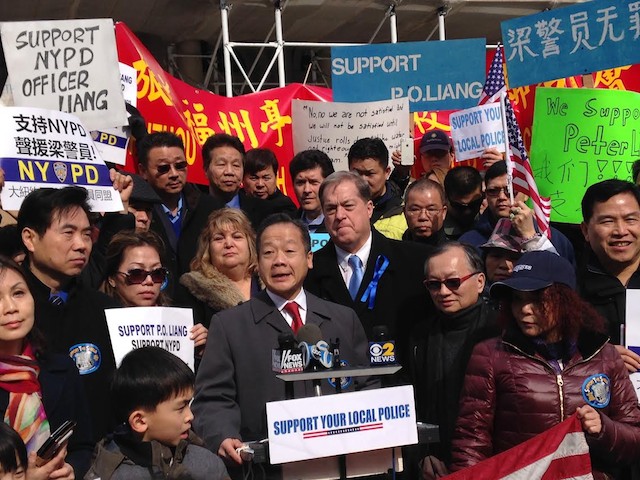 One of the organizers, Doug Lee (Esther Wang / Gothamist)

To help organize yesterday’s rally, Concannon leaned on his friends Phil Gim and Doug Lee, who met when they all ran as Republican candidates for state office.

Concannon says he feels the Chinese community is a “natural ally” of his group. And among this conservative, Republican-leaning segment of the Chinese immigrant community that Phil Gim and Doug Lee represent, Concannon has seemingly found his perfect “model minority” foil to police accountability protesters.

It’s a classic example of Asian Americans, framed as model minorities, being used (and agreeing to being used) as a wedge when it comes to issues of racial justice. Think of the affirmative action debate, where Asian Americans are lifted up as the example of positive racial uplift through hard work and dedication.

It would be a mistake, however, to think that everyone in the Chinese American and Asian American community agrees with the message of yesterday’s rally. 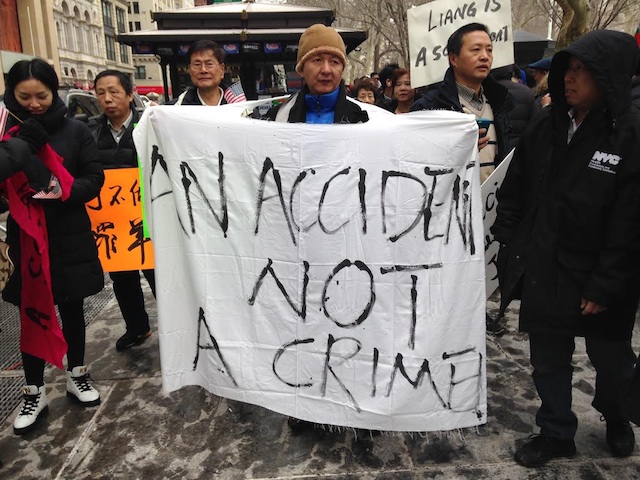 Councilmember Margaret Chin has come out vocally in support of the indictment of Officer Liang, as have organizations like CAAAV and Communities United for Police Reform, a coalition which counts other Asian American organizations in addition to CAAAV in its membership.

Nationally, there’s also a growing movement called #Asians4BlackLives that is organizing Asian Americans in support of police accountability and the #BlackLivesMatter movement.

“The Black-led civil-rights movement was key in the passing of voting and immigration laws that opened access for Asian Americans,” wrote #Asians4BlackLives members Ellen Choy and Kung Feng recently. “So we stand with the Black community as they have stood with us.”

The question isn’t whether the Chinese American community is “divided” or not on Peter Liang and the death of Akai Gurley — it’s a question of who’s doing the dividing, and why.

Esther Wang is a writer and community organizer based in New York City. Follow her on twitter @estherxlwang.

#Akai Gurley
#Chinatown
#Peter Liang
#republicans
#tea party
#original
Do you know the scoop? Comment below or Send us a Tip