Reports: Plaxico Burress Shoots Himself in the Leg 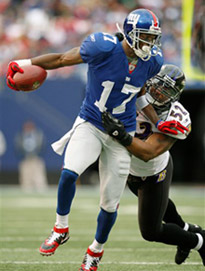 Oh, Plaxico Burress. Fox Sports reports, "The New York Giants wide receiver accidentally shot himself in the leg on Friday night... He spent the night in the hospital and the injuries are not believed to be life-threatening. The team is still trying to gather further information on the incident."

According to ESPN, sources say Burress suffered the gunshot wound in a club. The Giants have not yet commented on the incident.

Burress, who predicted the Giants would win the Super Bowl last season, was suspended for a game earlier this season for missing a team meeting (he claimed he was taking his son to school). He was not expected to play in tomorrow's game against the Washington Redskins after aggravating a hamstring injury last week in the game against the Arizona Cardinals. The Giants, currently 10-1, will start Domenik Hixon in Burress' place.

#accidental shooting
#football
#giants
#ny giants
#plaxico burress
#shooting
Do you know the scoop? Comment below or Send us a Tip
A new Gothamist is coming! We’ve moved comments over to our beta site. Click here to join the conversation and get a preview of our new website.