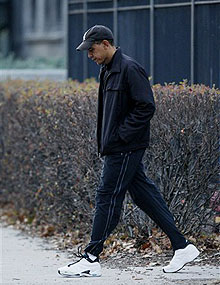 ABC News' George Stephanopoulous reports that President-elect Barack Obama's economic stimulus plan will be huge: Obama is "considering a stimulus package in the $500-billion range, which is 3 to 4 percent of GDP. That's a far larger stimulus package than the $175-billion Obama proposed on the campaign trail. Or the $300-billion stimulus which had been discussed as the upper limit."

Yesterday, Obama's advisers took to the Sunday morning news circuit: Senior economic adviser Austan Goolsbee accused the Bush administration of "dithering" on the economy while it soured, "We're out with the dithering, we're in with a bang." And Senator Charles Schumer, who thinks the stimulus package should be $500-700 billion, said Congress will get a stimulus package to Obama before January 20.

According to the Wall Street Journal, Obama will also "try to calm Wall Street about trying to rewrite the rules of existing aid to Wall Street, and excessive spending in his new administration." And Obama may not immediately repeal the tax cuts to the wealthiest and may instead let them run out in 2011, as scheduled.

Obama will announce his economic team today; analysts tell CNBC, "they'll have to walk a fine line between saying too much and saying too little."