Whoa: The NY Times, Post, and Daily News are reporting the same thing—that Caroline Kennedy has ended her six-week quest to take the junior Senate seat vacated by Hillary Clinton. (However, a source tells the AP that's not true—see the 11:24 p.m. update below.)

Kennedy apparently called Governor David Paterson today to withdraw her name from consideration. Per a source, the NY Times reports, "Her concerns about Senator Edward M. Kennedy’s deteriorating health (he was hospitalized after a seizure during the inaugural lunch on Tuesday ) prompted her decision to withdraw, this person said. Coping with the health issues of her uncle, with whom she enjoys an extraordinarily close bond, was her most important priority; a situation not conducive to starting a high profile public job."

The Post says Kennedy's withdrawal is "stunning" because "sources revealed that Paterson had intended to appoint her to the now-vacant seat today." A source close to Paterson told the Daily News, "As late as 24 hours ago, Paterson was telling people that it was her. He was with all these national Democrats. Everyone was excited about her coming on board and he was feeding into that, saying you're not going to be disappionted."

UPDATE 8:15 p.m.: Now the Post reports that Kennedy dropped out because she found out Paterson wasn't picking her: "Sources said the reason Paterson had decided not to tap the daughter of John F. Kennedy was her poor performances in media interviews and in in private sessions with various officials."

UPDATE 9 p.m.: The Daily News has this tidbit, for those holding out hope for a Senator Caroline Kennedy:

A Kennedy family source said cousin Kerry Kennedy spoke with both Gov. Paterson and Caroline Kennedy's political consultant, Josh Isay, and neither were aware she was bowing out Wednesday night.

Paterson, the source said, told Kerry Kennedy "he hasn't heard it and he's made no decision that would provoke her to leave. He said he's been getting calls and denying it."

UPDATE 9:55 p.m.: The Times' source says Kennedy "believed that the job was hers if she would accept it...but aides to Mr. Paterson would not comment on whether that was true." Further, Paterson's spokesman Errol Cockfield said the Governor considered Kennedy's dropping out a rumor, but: "More than an hour later, Mr. Cockfield asked that that statement not be published, but neither he nor the governor’s communications director, Risa B. Heller, would respond to questions about Ms. Kennedy." The plot thickens!

UPDATE 11:24 p.m.: It's the NY dailies versus the Associated Press: The AP spoke to a source (one who is not "authorized to speak for Kennedy") who "says she has renewed her determination to win appointment to the U.S. Senate seat once held by her slain uncle, Sen. Bobby Kennedy." Basically Uncle Ted's seizure only gave her "misgivings" but the source seems to think she's still going for it. Are Cuomo, Gillibrand, Maloney et al. hoping the AP has it wrong? 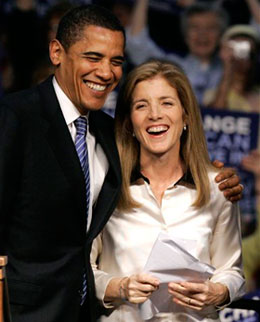 Kennedy signaled her interest in taking her uncle Robert Kennedy's Senate seat through talk from friends and relatives in early December—and then officially proclaimed her interest, telling them, "I feel like I'm a Kennedy Democrat, a Clinton Democrat, [Sen. Charles] Schumer, Barack Obama -- these are all leaders whose values I share and I feel like those are the kinds of values that I would bring." However, her first interviews with the press were underwhelming—as criticism that she was unqualified, especially relative to more experienced candidates, mounted.

Still, many notable figures supported her—most prominently, Mayor Bloomberg whose deputy mayor Kevin Sheekey was working to help Kennedy's Senate effort. And many thought Governor Paterson would inevitably take advantage of the Kennedy name and her Obama connections and appoint her.

Now, does this mean Attorney General (and one time Kennedy cousin-in-law) Andrew Cuomo is sitting pretty? Or will a Representative—Carolyn Maloney, Kirsten Gillibrand, Steve Israel—or Nassau County Executive Tom Suozzi or someone else be victorious? And does this change Paterson's announcement schedule in anyway?