The NYPD is failing to adequately police reckless drivers even as cyclist deaths and pedestrian and cyclist injuries climb, according to a report issued today by Transportation Alternatives [PDF].

Other precincts are devoting "disproportionate resources" to cracking down on cyclists, according to the report's authors. Although the NYPD started issuing moving violations for riding on the sidewalk in 2014, criminal summonses outnumbered the less-consequential violations 1,858 to 1,655 last year. In the 79th Precinct in Bed-Stuy, cops issued 146 criminal summonses for sidewalk riding, compared to 2 moving violations.

And when a hit-and-run driver struck and killed cyclist Matthew von Ohlen as he rode in a Williamsburg bike lane earlier this month—cops have said the driver may have done so intentionally—locals noted an uptick in red light and jaywalking tickets.

"Data-driven enforcement is a part Vision Zero, but the NYPD is not doing data-driven policing," said Transportation Alternatives Director Paul Steely White. "Instead they are policing by some historic bias that I don't understand." 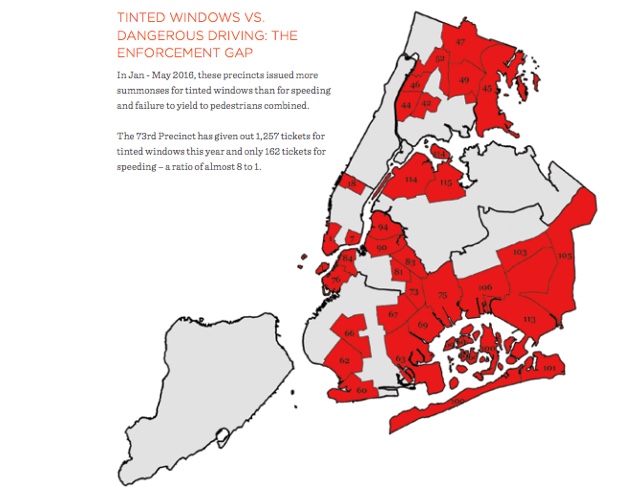 "Speeding and failure to yield pose the greatest risk to pedestrians, cyclists and drivers," mayoral spokesman Austin Finan said. "Our enforcement efforts are laser-focused on reducing these dangerous driving behaviors and making our streets safer for everyone."

However, 17 precincts, primarily in Manhattan and Queens, saw a decrease in speeding tickets in early 2016. In Manhattan North as a whole, speeding summonses are down 19%.

"The variability in ticketing practices as shown by this data indicates that there is no unified, citywide Vision Zero policy and protocol," Transportation Alternatives writes. "Consistent, predictable enforcement is most likely to have the deterrent effect that changes behavior and saves lives."

To address cyclist safety issues, this year the NYPD has launched an initiative called Bicycle Safe Passage. For four-day stretches in May and June, precincts across the city cracked down on drivers blocking bike lanes, as well as those who failed to yield to pedestrians. More than 800 failure to yield tickets were issued in June, as well as 1,086 red light tickets and 1,757 tickets for blocking a bike lane.

"We've regularized enforcement of the most dangerous driving behaviors, and the numbers bear that fact out across the board," said Finan, the mayor's spokesman.

Transportation Alternatives called the Safe Passage initiative a "welcome, if short-term and occasional, move," adding that the data doesn't include breakdowns by precinct. It also doesn't indicate whether cops are focusing on the most dangerous streets and intersections.

#broken windows
#cis
#nypd
#traffic deaths
#transportation alternatives
#vision zero
Do you know the scoop? Comment below or Send us a Tip