A few weeks back, Governor Cuomo assured some reporters that the subways were getting better, citing conversations he'd had with "people," who'd apparently noticed these "improvements" by "looking very carefully." But according to at least one person's thorough examination, the situation underground doesn't seem to be improving at all, and the economic cost of these constant subway delays may be way worse than previously thought.

On Sunday, New York City Comptroller Scott Stringer released an analysis showing the city's economy is losing hundreds of millions of dollars each year as a result of stalled trains, with a
worst-case scenario economic impact of nearly $400 million annually. The report draws from a survey of riders conducted earlier this summer, which found that 74 percent of straphangers had been late to work, 65 percent had been late to pick up a child and 13 percent had experienced loss of wages due to delays over a three month period.

The methodology for Stringer's new report used the MTA's definitions of "minor," "medium," and "major" delays, creating different scenarios under the assumption that one hour lost is worth $34—the city's average hourly wage. Using the below formula, the analysis found that the 5, A, 7, F, and 4 trains were the "worst offenders," reaching a total yearly cost of $140 million. 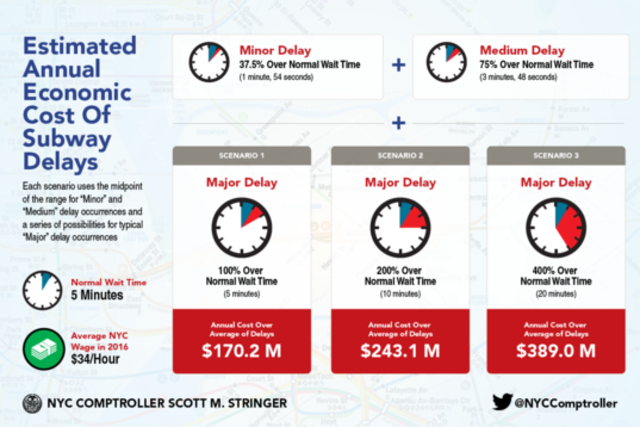 "What these new numbers show is that the cost of inaction is greater than the cost of action; that subway delays take a massive toll on our economy," Stringer said in a statement. "We need to fix our subways both to improve quality of life and our economy. This isn’t a choice—it’s a must,”

Reached for a comment, MTA spokesperson Shams Tarek told Gothamist, "As the City economy continues to grow and outpace the nation which is due largely to our unparalleled mass transit network, we appreciate the Comptroller’s support of Chairman Lhota's Subway Action Plan and his call for City Hall to commit to paying its fair share to implement the Plan.”‎

Stringer's previous survey of subway riders also found that the human cost of delays was especially high in poorer communities. While just 10 percent of New Yorkers living in high-income zip codes said they'd been reprimanded at work because of delays, that number jumped to 24 percent in lower-income areas. In the Bronx, 54 percent said they experience significant delays more than half the time, compared to 45 percent in Queen, 40 percent in Brooklyn, and just 25 percent in Manhattan.

In response to these costly delays, the comptroller has proposed funding signal upgrades and track repairs through a $3.5 billion bond act. In June, a report released by the Independent Budget Office found that the majority of signal updates and repairs scheduled to begin this year are currently delayed, and only one update in the current capital plan will be completed by 2018.

"There is no question our subways are in crisis after decades of underinvestment and inaction," Stringer added. "With the ‘Summer of Hell’ fading into what could be a ‘Fall of Frustration,’ every level of government needs to step up. Our subway system is the backbone to our economy. That means with every delay, there aren’t just lives affected—there’s an economic consequence.”