The gender wage gap for women of color in New York City far exceeds the national average, according to an analysis released Monday by Public Advocate Letitia James. Assessing median annual incomes by race and gender, James's office found that Asian women in NYC earn 63 cents to a white man's dollar, compared to 86 cents at the national level. Black women in NYC earn 55 cents to the dollar (versus 64 cents nationally) and Hispanic women only 46 cents (versus 54 cents nationally).

Represented in dollar amounts, the median annual income for a Hispanic woman in NYC is $40,439 less than the median income for a white man. The difference for a black woman is about $33,671.

There are about 4.4 million women in New York City, according to the report, making up just over half of the city's total population. Women make up about 49% of the city's workforce, and about 40% of NYC businesses are minority or women-owned (M/WBEs).

"There is simply no excuse for women to be paid less than men," said James in a statement. "Whether you work in the public sector or the private sector, equal work must mean equal pay."

Among college-educated women in NYC, the gender wage gap is 16%. Among women with postgraduate degrees, it jumps to 20%. 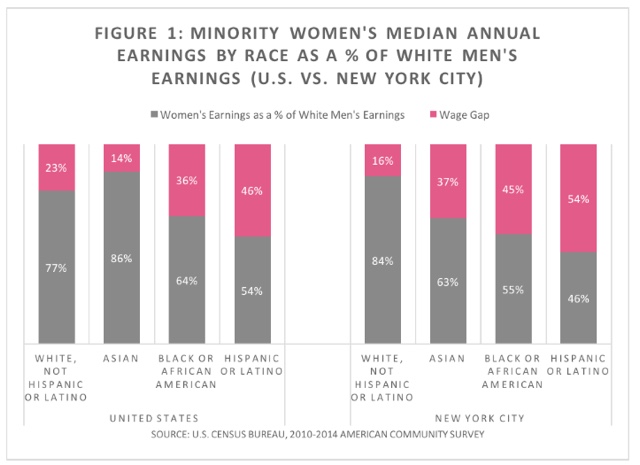 (via the Public Advocate).

Today's report also analyzes the wage gap for women who work in municipal jobs in NYC, compared to those who work in the private non-profit and for-profit sectors, and finds that the gender wage gap is significantly larger for city employees.

This pay disparity is prevalent despite the fact that compensation for NYC employees is set by a fixed civil service pay scale. A 2011 report on civil salaries for men and women by then-Comptroller John Liu found that while women's base salaries were 92% of men's on average, the gender wage gap jumped to 20% when overtime and bonuses were taken into account.

The report also points out that women tend to be concentrated in lower-paying City jobs. James's office found that the majority of female municipal workers in NYC, about 55%, are employed by the Department of Education. In the DOE, 77% of all employees are women, and the median full-time salary is about $69,900. For comparison, women make up 9% of the Fire Department, where the median salary is among the highest in the city—about $76,480.

"As a government, we should be particularly alarmed that there is a disproportionately higher wage gap among municipal employees," James said. 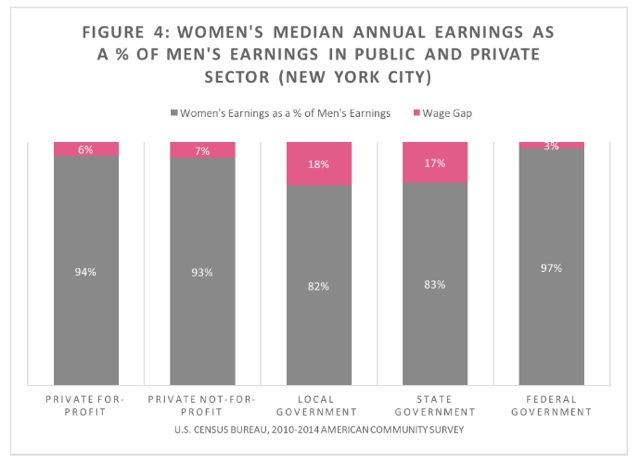 (via the Public Advocate).

In order to close the wage gap for municipal workers, James recommends that City agencies be prohibited from asking job applicants about their earning histories. She'd also like all municipal job announcements to include a salary range. Private employers would be "encouraged" to follow suit.

James also calls for an Equitable Pay and Opportunity Task Force to study tactics for closing the wage gap, and a bigger push for "family-friendly workplace policies." In December, Mayor de Blasio mandated six weeks of paid family leave for all non-union City workers. And in November, he set aside $10 million in funding for women and minority-owned contractors applying for City housing projects.

"We recognize that this problem demands our attention," said Azi Khalili, Executive Director of the Mayor's Commission on Gender Equity, in a statement. "We are committed to working with elected officials and leaders in the City Council, including the consideration of appropriate legislation."

#gender pay gap
#inequality
#municipal workers
Do you know the scoop? Comment below or Send us a Tip