The sea levels surrounding the New York metropolitan area have risen a foot since 1900—and, due to our rapidly changing climate, could rise another foot in less than 15 years, according to a new report by the Regional Plan Association.

According to the RPA, the tri-state area could see at least one foot of sea level rise as soon as 2030 (or, in a best-case scenario, by 2050). Some of the city's shoreline is relatively protected against flooding, but neighborhoods around Jamaica Bay, Flushing Bay, and along Staten Island's eastern shore will be seriously impacted.

Overall, a foot of flooding would affect 60 square miles of the tri-state area, where 19,000 people live and 10,000 work. By 2080, the RPA expects sea levels to have risen by three feet and periodically-flooded areas will become permanently inundated, including the runways and some terminals at LaGuardia. Flooding will begin to affect subway service and portions of the Metro North Hudson line. Parts of Bridgeport and New Haven in Connecticut will also be permanently submerged, and up to 40,000 Long Island residents could be permanently displaced by flooding. 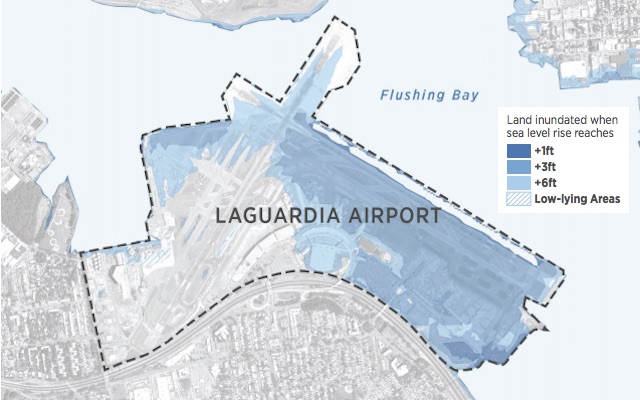 In less than a century, sea levels could rise by six feet and completely transform the coastline. A huge swath of Brooklyn and Queens—including Coney Island, Brighton Beach, and the Rockaways—would be completely submerged. In Manhattan, Harlem, Battery Park City, Chelsea, Hudson Yards and the Lower East Side will be permanently flooded, and parts of the Bronx including Throggs Neck, University Heights, and Edgewater Park will see periodic flooding.

Up to 15,000 Staten Island residents could be displaced as a result of permanent flooding, which would affect more than 200,000 New Yorkers overall, according to the report. Both runways and terminals at LaGuardia would likely be completely flooded, and parts of Newark Liberty Airport would be affected as well. JFK will likely be unaffected by rising sea levels, but the report says it, too will have to be safeguarded against future storms. 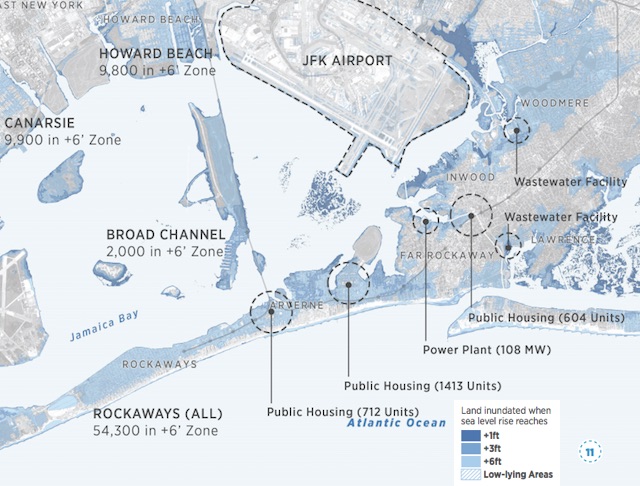 "By 2100, the entire coastline of the United States will need funding every year," in order to protect residents from Hurricane Sandy-levels of flooding, oceanography researcher Philip Orton told Gothamist.

A similar map released earlier this year suggested that sea levels could rise up to three feet by 2100 due to melting ice caps and an additional foot each decade by 2150—another map shows the entire city being inundated as sea levels rise 250 feet over the next thousand years, eventually drowning us all. And even if we slash global carbon emissions by 2050, we could still lose Coney Island to the rising tides.

The RPA has outlined three broad solutions to prepare for the rising sea levels: pumping sand onto beaches and building higher sea walls, creating more elevated buildings and other infrastructure that will adapt to rising sea levels, and abandoning coastal development altogether. All of these solutions, they point out, require a great deal of funding and planning.

In order to ward off the most catastrophic effects of climate change, the RPA warns, the U.S. must implement the 2015 international Paris Agreement limiting greenhouse gas emissions. Unfortunately, our President-elect has claimed that climate change is a hoax made up by the Chinese. Scott Pruitt, Trump's pick to head the Environmental Protection Agency, is a known climate change denier and has repeatedly sued the EPA over protective policies.

If you find any of this alarming and want to try to do something about it, call your senators and ask them to oppose Trump's appointment of Pruitt for EPA administrator, get involved with a group like 350, and petition companies and universities to divest from fossil fuel investments. In your everyday life, you can recycle, bike or take public transportation whenever possible, and donate to pro-environmental organizations.

#climate change
#environmental protection agency
#epa
#flooding
#regional plan association
Do you know the scoop? Comment below or Send us a Tip