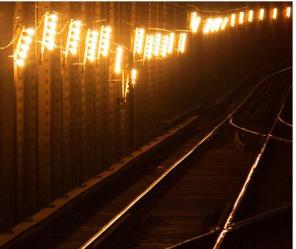 The NYC Transit Authority issued a report about separate incidents that led to two track worker fatalities in April. According to the NY Times, much of the blame is placed on an "organizational culture" where "critical safety rules were not practiced in day-to-day operations."

On April 24, Daniel Boggs was hit by a southbound 3 train at the Columbus Circle station when he was in the down express tracks of the 1/2/3 line. The 3 was scheduled to run on the local track, but had been diverted to the express tracks due to a stopped train at 66th Street. Newsday reports that Boggs' supervisor Curtis Hall violated procedure because he did not "call the rail control center before sending employees onto the tracks." The report also suggested that Boggs was at fault for stepping onto the express tracks without looking both ways, but the union disagrees with the finding.

On April 29, track workers Marvin Franklin and Jeffrey Hill were hit by a G train while doing work at the Hoyt Schermerhorn station in Brooklyn. It turned out that they were instructed to fetch a dolly from the A and C tracks, where service was suspended, and they crossed the still-active G tracks. The report found that supervisor Lloyd London was supposed to watch out for oncoming train traffic, but he left his post to help collect other equipment. Additionally, other criticism: Franklin and Hill were faulted for not putting mats over the third rail, the supervisor should has suspended work because of that, supervisors should have advised Franklin and Hill of a safer way to remove the dolly.

NYCTA president Howard Roberts said that he took the deaths personally and moved to have all track workers retrained on safety procedures. Additionally, more radios have been distributed, the NYCTA is working to fix non functioning emergency call boxes, and new procedures have been put in place.