Report: Rikers Violence Up As City Spends More Per Inmate

A report released today by the office of Comptroller Scott Stringer [PDF] emphasizes that violence in NYC jails continued to increase this year—as it has, steadily, since 2008—even as Department of Correction funding has gone up. Much of this spending has been part of recent City efforts to reduce what Mayor de Blasio described this spring as Rikers' "culture of violence."

According to today's report, the annual cost-per-inmate in NYC jails increased 17% in FY2015—the largest percentage rise in inmate spending in the last three decades—to $112,665. NYC already spends nearly twice as much per inmate as Miami, Los Angeles, and Chicago.

"We aren’t seeing any real results or improvements," said Stringer in a statement. "We need to find ways to protect both guards and inmates, while at the same time making sure that the substantial resources being spent on this problem aren’t simply wasted.”

The statistical increase in DOC spending per-inmate is due, in part, to a 10% decrease in the total number of inmates. Stringer's office has found that the number of average daily inmates in NYC jails dipped to 10,240 in the last year—its smallest population in three decades.

In April, de Blasio announced a plan to reduce Rikers' inmate population by 25 percent. His so-called "Justice Reboot" called for speedier court appearances for inmates (within 45 days of imprisonment, rather than, say, a year-plus). It also called for an electronic-payment option for summons fines, at a time when 38% of summonses went unpaid, resulting in arrest warrants. 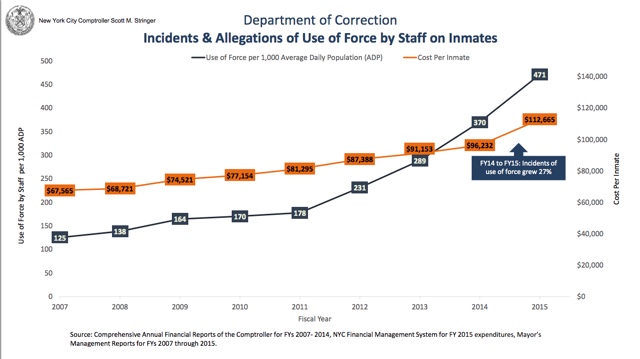 De Blasio has also recently invested in a 14-point violence-reduction plan. Introduced in March, it's aimed at limiting the flow of contraband into Rikers, through stricter visitor polices—fewer hugs per visit, and new plexiglass partitions between inmates and visitors. Granted, guards have also proven themselves highly culpable in prison smuggling schemes. Relatives of inmates have since protested that new visitor rules will only deter relatives from visiting their loved ones in jail.

In June, the city settled Nunez v. City of New York, a 2012 class action lawsuit claiming that 11 inmates had suffered "unprovoked" beatings at the hands of Rikers guards. As part of the settlement, de Blasio instated a new federal monitor to oversee Rikers reforms, like a new, explicit policy for documenting and reporting use of force against inmates; a trial run of body cameras for correction officers; and serious penalties, including job termination, for offending officers.

Officers have been disciplined in a few high-profile cases recently. Last month, a captain and an officer at Rikers were charged with assault after allegedly beating an 18-year-old inmate last winter. Also in September, two Rikers correction officers were suspended without pay for allegedly convincing four inmates to assault a fellow prisoner, and then filing false paperwork in an attempt to cover it up. They could face up to seven years in prison, each.

Still, the NY Times reports that stabbings and slashings at Rikers increased to from 88 to 108 in the past fiscal year. There were 4,409 confirmed instances of physical force used by officers on inmates in the same time period.

In response to today's report, Mayoral Spokeswoman Monica Klein stated, "Meaningful reform takes time, and we are confident the Commissioner is creating safer and more supportive jails for our staff and inmates alike."

According to the City, use of force incidents that resulted in serious injuries decreased slightly this fiscal year, as did use of force in Rikers' adolescent facility. These reductions, officials argue, are thanks to targeted spending on deescalation training for officers.