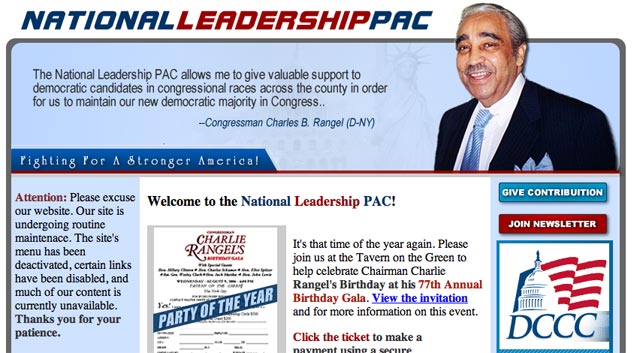 Representative Charles Rangel is a just a magnet for media investigation these days! The NY Times questioned his four rent-stabilized apartments and, more recently, a large donation to a school being named after him; the Post found out about his vacation villa and unreported income from it. Now it's Politico which does some digging about campaign websites Rangel's son created for his dad.

Politico reports, "Between 2004 and 2007, Rep. Charles Rangel steered nearly $80,000 in campaign cash to an Internet company run by his son – paying lavishly for a pair of political Web sites so poorly designed an expert estimated one should have cost no more than $100 to create." Rangel's staff response was, "Steven Rangel's firm was paid roughly $2,500 on a monthly basis—less than the firm that had previously managed Congressman Rangel's Web and on-line operation (Network Politics)—and the firm's fees included money for Web advertising designed to promote traffic to the Web site." (Politico points out Rangel's office spent more on online efforts than the next two Representatives, who spent in the $30,000-44,000 range for the same 2004-2006 time period.)

While the payments for work done by Steven Rangel is "legal under federal law," Politico spoke to a web design company which said of one site, National Leadership Pac, "For something of that standard, I would not pay more than $100.” And the Campaign Legal Center, "a nonprofit organization that monitors compliance with electoral law, said, "This is probably legal but is definitely wrong. You're in a situation where you were given money for a campaign and it's being used to enrich family members. The return argument is they're performing legitimate services. The question that needs to be asked in this case is: Was this a legitimate payment or was this a payoff?”

Steven Rangel's personal website now says, "My personal website has been taken down because it was attacked by a spammer," but you can see it via the WayBack Machine--he is a Marine turned lawyer turned entrepreneur.