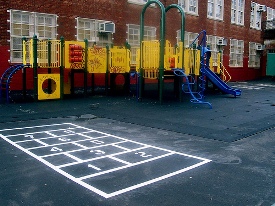 Public Advocate Betsy Gotbaum announced findings of a new report that reveal public school students are getting much, much less physical education than they should be. Based on data from 100 randomly selected schools, only 4% of third graders and only 12% of fourth graders participated in daily mandated P.E. classes.

Gotbaum said, "Many schools are breaking the law by not complying with state mandates, and that’s a big problem because kids are not getting the exercise they need." She and City Comptroller William Thompson accused the Department of Education of failing students as childhood obesity is rising at an alarming rate.

The Department of Education tells the Sun it created the Office of Fitness and Health Education and has hired a director to help bring more physical fitness progreams ot schools, even ones without gyms (like having students do yoga and Pilates).

#Betsey Gotbaum
#physical education
#public advocate
#public school
Do you know the scoop? Comment below or Send us a Tip