Report: NYPD Response To Emotionally Disturbed Persons Leaves Much Up To 'Random Chance'

When NYPD Sergeant Hugh Barry reached for his gun rather than his taser and fatally shot 66-year-old Deborah Danner inside her Bronx apartment last October, the response from City Hall and the NYPD was swift and critical. Danner, who allegedly approached Barry brandishing a baseball bat, had struggled with mental health issues her entire life. When she was killed, the NYPD was over a year deep into a new Crisis Intervention Team training program, created to teach beat cops how to safely deescalate encounters with civilians in mental crisis. Barry had not trained in CIT; nor did he use any of the tools he has learned in basic deescalation training.

"That's not how it's supposed to go. That's not how we train," newly-minted NYPD Commissioner James O'Neill told reporters after Danner was killed.

A report out Thursday [PDF] from the Department of Investigation found that while CIT training has been conducted relatively smoothly since the program launched in June 2015, the department has so far failed to adequately implement CIT tactics into daily policing. As of yet, the NYPD doesn't have a reliable system in place to prevent worst-case-scenario encounters like the one between Barry and Danner.

"For NYPD to advance its policing in this critical area, it must implement an effective system for getting the newly trained officers to the situations where their training is most needed," said DOI Commissioner Mark Peters in a statement. "Our independent investigation found that this is not yet happening."

The DOI reviewed 18 months of CIT training and implementation following the program's launch, interviewed NYPD brass, held focus groups with CIT-trained officers, and sat in on four CIT training sessions. Investigators found that the NYPD's dispatch system currently can't identify officers who have CIT training. As a result, whether or not a CIT-trained officer is dispatched to respond to a mentally-disturbed person is "left to random chance." This roulette plays out over approximately 400 mental crisis calls per day.

The NYPD also doesn't have a dedicated CIT coordinator on staff, meaning no one within the department is completely dedicated to the program, taking notes and suggesting tweaks. Investigators also noted a lack of accountability for CIT-trained officers. According to today's report, the NYPD does not have an incident report pertaining specifically to mental health issues. As a result, "NYPD cannot monitor officer compliance with CIT procedures nor track how CIT is working on the ground."

The history of CIT training in the United States stretches back to 1987, when police in Memphis, Tennessee fatally shot 27-year-old Joseph Dewayne Robinson, who had Paranoid Schizophrenia and was holding a knife when police intervened. In response to Robinson's death, the Memphis Police Department began implementing CIT—working with the city's health department to develop non-violent responses to similar encounters. New York City was comparatively slow in adopting the model, only instating an NYPD-Department of Correction task force to address policies surrounding the mentally ill in 2014, after the deaths of two inmates on Rikers Island.

"I never thought we'd see a day when the NYPD would adopt a crisis-intervention training model," said Mary Beth Anderson, Director of the Urban Justice Center's Mental Health Project, and a member of the city task force. "I can tell you change is slow in any big bureaucracy."

To date, according to the NYPD, 5,296 officers have received the training, representing about 10 percent of the force, and 15 percent of all patrol officers. In four days of sessions, officers learn from trained officers and doctors, and "respond" to emotionally disturbed individuals portrayed by actors. According to WNYC, the NYPD has committed to train about 10,000 officers in total, or about one third of the force. DOI suggested that the NYPD consider training more officers.

"The rule of thumb around the country is that you need about 40 percent of the force trained," said Steve Coe, CEO of Community Access, an organization that defends the rights of mentally disabled New Yorkers and has advocated for CIT training in New York for decades. "We've been advocating for them to train 15,000 officers. The training is excellent, from everything we have seen and heard. So get more people trained so there are better odds that someone will be present." 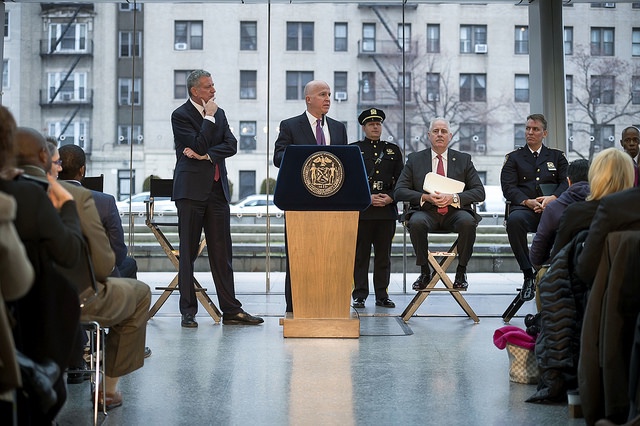 NYPD spokesman J. Peter Donald said that the department will respond to the DOI in 90 days, and stated that the NYPD is "currently assessing the on-going CIT program."

"Currently," he added, "the Department is providing a list of all crisis intervention trained officers to supervisors in commands during every shift to enable them to direct officers, where appropriate, with the enhanced training and skills to those types of calls."

The NYPD also has an Emergency Service Unit, which the DOI noted has training that "somewhat mirrors the standards of national CIT training."

The ESU "is available to respond to calls for the emotionally disturbed, when confirmed and requested by responding officers on patrol," Donald said.

Advocates have criticized this reliance on ESU in delicate situations. Carla Rabinowitz, another Community Access coordinator, told AM New York last fall that ESU often “come in with nets, taking down doors."

Coe, of Community Access, worries that the report is too narrowly focused on the NYPD. Other city agencies, like the Human Resources Administration and Department of Health, will need to help increase the effectiveness of CIT, he argued.

"The police can't be the leaders of the whole CIT program," Coe said, adding that the city's mental illness task force has recommended "diversion centers," where CIT officers could take individuals in crisis—"a place to take people after the encounter other than the hospital or precinct."

"All of these things need to work together," Coe said.

"We're confident that the department will review this report as part of its ongoing effort to hone best practices and more effectively dispatch CIT-trained officers to intervene in and deescalate mental health crisis situations," said Mayoral spokesman Austin Finan in a statement.

#doi
#mental health crisis
#nypd
#original
Do you know the scoop? Comment below or Send us a Tip