Report: NYC Now The Most Expensive City In The World

But just chill for a second while we break this down.

It's important to keep every bloated metric and sky-written superlative in perspective, because rankings are probably cooked up using weight-loss pill pseudo science. This most recent declaration that NYC is the most expensive city in the world comes from the Swiss bank UBS, which, if there's any hope for determining a victor in something as nuanced as "most expensive," I'd trust a Swiss bank to get it right.

UBS took into account factors like the cost of goods and services, as well as real estate. But also, Zurich and Geneva are more expensive this year thanks to Swiss National Bank’s decision to end its minimum exchange rate. Additionally, prices in Japanese and European cities fell as the euro and yen weakened against the dollar, the WSJ reports.

But keep in mind: Along with Zurich and Geneva, NYC also earns the highest wages net of taxes. Purchasing power however, is highest in Luxembourg, Zurich and Geneva, and in the U.S., Miami and Los Angeles. A New Yorker needs to work around 24 hours to earn enough to buy an iPhone 6, which is up from 20.6 hours for residents of Geneva.

The paper helps us visualize what that means: 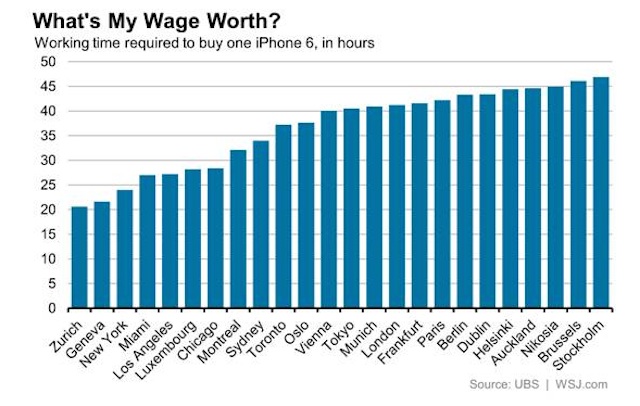 #rankings
#real estate
#ubs
Do you know the scoop? Comment below or Send us a Tip