Report: New York Gives Corporations More In Tax Breaks Than Any Other State

New York's business tax incentives, a cornerstone of Governor Cuomo's two terms in office, are the most expensive and among the least effective of any in the country, according to a recent study by an economist.

The report, by Timothy Bartik of the Kalamazoo, Michigan W.E. Upjohn Institute for Employment Research, estimates that New York awarded $8.25 billion in tax incentives in 2015. The incentives, in comparison to those of the 10 most populous states in the country, cost as much as those of the next three states combined, according to Bartik's analysis.

New York gives out tax breaks to a wide variety of corporations, including developers, banks, craft beer brewers, film studios, and even, in the '90s, the owners of the New York Stock Exchange. The stated thinking behind this is that tax breaks entice corporations that might otherwise leave or invest less in the state to put money into building buildings, creating jobs, and making stuff, which will in turn lead to more jobs, more profits, and more buying along down the supply chain. Looked at another way, it's a form of trickle-down economics that rewards companies for threatening to break up with you.

There's also little evidence it works. As the Citizens Budget Commission of New York notes in a blog post on Bartik's study, a majority of the research published to date shows that tax incentives either have no measurable economy-boosting effect, or have high costs per job created. In 2013, Cuomo's own tax commission found that corporate tax incentives "may not result in a good return on investment," and suggested that "more efforts are needed to measure their effectiveness."

In this year's budget negotiations, both the state Assembly and the Senate called for new disclosure requirements to track the spending and results of economic development programs. But the reforms didn't make it into the final budget agreed on Sunday night. The final budget did include new annual reporting requirements for Empire State Development, a quasi-public organization that dispenses taxpayer money to companies and is controlled by Cuomo without much oversight.

New York's tax incentives are, according to Bartik, the costliest as a percentage of gross taxes, amounting to a whopping 75.9 percent of the state's gross taxes. And yet, what the state gives away in taxes is the second-least effective at 3.53 percent of value-added, an economic measure showing the difference between an economy's gross output and intermediary sales. Only New Mexico gives away a greater percentage of tax money for its value-added. By both measures, New York gives 2.5 times the national average.

Despite the absence of proof of tax incentives' efficacy, states around the country have increased their use since 1990, Bartik writes, with New York consistently leading the way. The growth of incentives has a snowball effect, with states competing to offer ever-more-enticing tax deals as corporations navigate an increasingly friendly set of options. So why do New York's politicians keep doing something that shows little or no likelihood of offering a return on investment?

"To give them the benefit of a doubt, they think that the next benefit will be effective," said David Friedfel, director of state studies for the Budget Commission, a New York-focused watchdog group. "There's a desire to be seen as improving the economy. The counter-factual would be [that they're saying], 'There's nothing we can do, so we're just going to throw our hands up and see what happens.'" 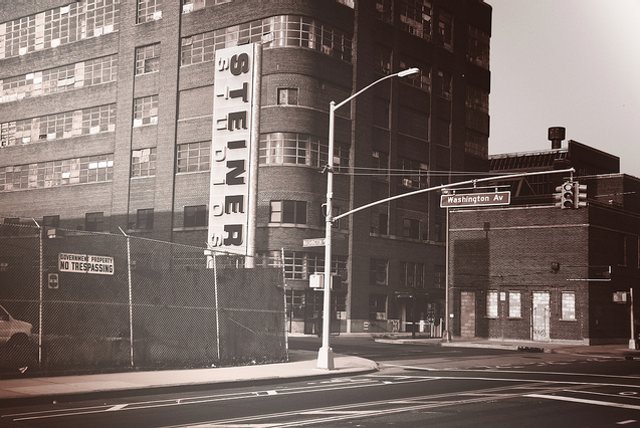 The state offers film production companies a 30 percent tax credit on certain expenses if they film at sound stages in New York City, and 40 percent if they make movies in certain upstate counties. (Matt Heidelberger/Flickr)

Friedfel said that the $420 million annual tax credit for the film industry, which the state just extended again, is particularly unnecessary.

"New York state has the most generous film tax credit," he explained. "We already have an established film industry in New York. It's time to scale it back."

New York's tax incentive burden grew again in this year's budget. The budget creates new tax credits of a maximum of $10 million a year for life science research. (A legislature-proposed music and e-gaming tax credit program got the approval of the Assembly and Senate, but didn't make the cut in the final budget.)

Friedfel praised the Excelsior Jobs Program, which requires companies to create jobs and report on their performance, as a model of a tax perk initiative that seems to be working.

For the time being, though, the dominant model looks more like Central New York Hub for Emerging Nano Industries, a $15-million, state-funded high-tech film studio upstate where Cuomo promised 350 jobs in 2014 and a total of two people were employed full-time as of August.

Developers who so happen to be Cuomo donors and recipients of tax breaks and copious state money for similar signature economic development projects are also at the center of federal criminal cases against two former aides to the governor and his handpicked nano-technology czar. The latest budget includes another $400 million for the Buffalo Billion projects at the center of the scandal.

This, according to another budget observer, is bizarre.

"Despite multiple federal indictments, poor program audits and lackluster annual reports, the state continues to move full steam ahead on economic development efforts without putting in place reasonable accountability and transparency measures to ensure the state is spending this money wisely," said Ron Deutsch, director of the Fiscal Policy Institute. Both the Institute and the Commission are calling for the state to release more comprehensive data to the public about who is receiving what from economic development programs, and whether the public is getting its money's worth.

The Governor's Office did not respond to a request for comment.

#andrew cuomo
#buffalo billion
#corporate rule
#economic development
#neoliberalism
#tax break
Do you know the scoop? Comment below or Send us a Tip