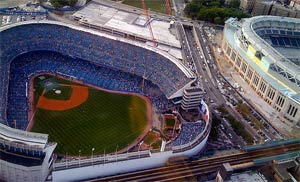 Assemblyman Richard Brodsky had strong words--and a damning report--for the new Yankee Stadium yesterday. Brodsky believes the Yankees got too good a deal from the city, "This stadium is being built by the people of the city and the state of New York. In return, they’re getting almost nothing. This deal does not serve the public’s interest. It serves the Yankees’ interest.”

His 31-page report claims the city "inflat[ed]property values and promis[ed]nonexistent jobs to get as much as $1 billion in tax-exempt bonds and public subsidies for the Bronx Bombers." The Yankees apparently made an "unsubstantiated threat" to leave New York, so the city committed $550 million to $850 million to the project. The Yankees are paying for the stadium themselves, but did get almost $1 billion in tax-exempt bonds from the city. And don't get Brodsky started on the luxury box for city officials at the new stadium!

Mayor Bloomberg said, "This is a great project. We want these kinds of facilities here. Having new stadiums is as important as other things in terms of, not just the spirit for the people who live here, but our economy." While he noted that the city paid little for infrastructure, the city is not charging the Yankees rent or property taxes, and the city and state also gave over "$300 million in cash subsidies for garages, a Metro-North train station, replacement parks and road work," per the NY Times. And the Yankees disagreed with Brodsky's characterization, saying there has been "enormous developmental economic effect in the Bronx, in the city and in the state."

The Daily News has Brodsky's report (PDF) and the Yankees' response (PDF).

Photograph of old and new Yankee Stadiums by absolutewade on Flickr

#new Yankee Stadium
#Richard Brodsky
#yankees stadium
Do you know the scoop? Comment below or Send us a Tip