More than half of East New York's current residents won't be able to afford the "affordable" apartments proposed as part of Mayor de Blasio's $41 billion housing plan, according to a report issued Thursday by Comptroller Scott Stringer's office.

The report echoes what many East New York residents and housing advocates have long argued: proposed rezoning of the neighborhood would not generate enough housing at truly affordable rents for the neighborhood's long-term residents.

"Instead of strengthening the affordability of this community, the proposed rezoning would serve as an engine for displacement," said the comptroller in a statement.

East New York is the first of fifteen low-income neighborhoods scheduled to be rezoned as part of de Blasio's plan. In February, the mayor released an initial blueprint for rezoning in East New York's Cypress Hills neighborhood and adjacent Ocean Hill in Bed-Stuy, which calls for the construction of 7,000 new apartments by 2030, plus an additional one million new square feet of commercial space.

According to Stringer's report, the median income in East New York is just $32,815 per year.

The city defines an "affordable" apartment as one that rents for 30% of the household's annual income. By Stringer's count, these "affordable" units would be a stretch for 55% of local residents.

"There's nothing affordable about a housing plan that is beyond the reach of half the community," wrote Stringer in a letter to City Planning Commission Chair Carl Weisbrod. 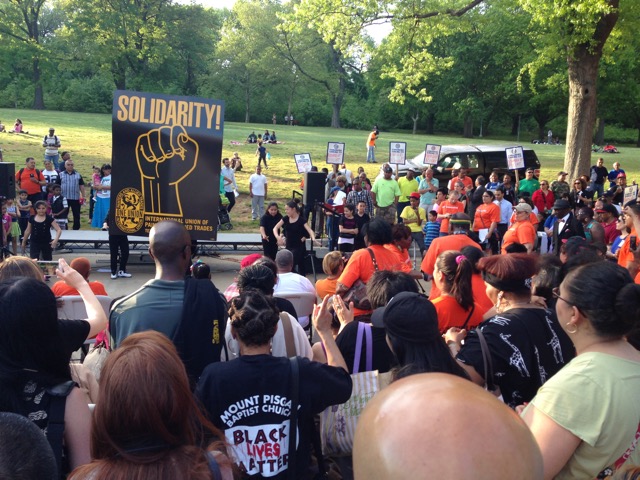 New affordable units would be constructed according to Mandatory Inclusionary Zoning, a proposed city-wide zoning change that would require 25-30% of apartments in new developments to be permanently affordable.

Community Boards across the city have recently voted against MIZ, arguing that the benefit of a small number of affordable units will be outweighed by the influx of more affluent renters; Councilmember Inez Barron, whose district includes a small portion of East New York's rezoning area, has described it as "totally unrealistic" and a "model for gentrification."

According to Stringer's report, almost 50,000 of East New York's current residents live in unregulated housing (apartments that are neither NYCHA-run nor rent stabilized) and would therefore be at risk of displacement with the predicted influx of higher-income residents.

The Mayor's office has dismissed Stringer's analysis, arguing that the "first wave" of affordable housing in the neighborhood would generate 1,200 "100% affordable" apartments over the next two years.

Mayoral spokesman Wiley Norvell also pointed out that any developer receiving an additional HPD subsidy—in his estimation, that means most developers coming to East New York in the first two years of the plan—will be held to stricter affordability standards: at least 40% of the units would have to be set aside for renters who earn between $23,350 and $38,850 per year.

Norvell has also stressed that the displacement Stringer predicts in East New York is not a "symptom of the rezoning," but, citing Bushwick and Crown Heights as case studies, rather a "byproduct of a very hot housing market" across the borough.

"The comptroller has it completely backwards," he said in a statement. "These are families that are in danger today, because the market is already putting pressure on their rents. It’ll take enormous preservation and new affordable housing efforts to turn that tide, which is precisely what the City is working for."

Maritza Silva-Farrell, a coordinator for the tenant advocacy group Real Affordability for All [RAFA], remains unpersuaded by City Hall's assurances. "If you think of the number of low-wage workers in our city, who are hoping to make $15 an hour, that gets you $25,000 a year," she told us this fall. "That is not what this housing plan is going to be covering."

RAFA released an alternative rezoning plan in September, which calls for each of the 15 rezoned low-income neighborhoods to include a "special purpose district." In that district, developers hoping to earn city subsidies would be required to build 50% affordable units—not by citywide AMI standards, but by the standards of that particular neighborhood.