Report: More Than Half The City's Privately Owned, Allegedly Public Spaces Aren't Playing By The Rules

More than half of the so-called privately owned public spaces in the city are not meeting the terms agreed to by developers who got to build bigger on the condition that they maintain the spaces, according to an audit by the Comptroller's Office. The spaces, called POPS, include atriums, lobbies, and plazas. They are supposed to be built and maintained in exchange for zoning variances. Under various iterations of the program, building owners who take advantage of the scheme promise to keep certain public hours and specific amenities such as benches and plants.

Of 333 spaces looked at by comptroller auditors, 182 weren't upholding the requirements of the deals struck by their owners.

"What’s happening is simply unbelievable. It’s egregious," Comptroller Scott Stringer said in a statement. "New Yorkers are literally getting cheated out of tens of millions of dollars in public space—and the city is willfully choosing to do nothing about it."

The Department of Buildings and Department of City Planning are responsible for overseeing privately owned public spaces, but they have no program in place for proactive inspections, and researchers found that 275 of the spaces hadn't been inspected in the last four years.

The last comprehensive survey of the city's POPS was done by the Department of City Planning and Harvard urban design professor Jerold Kayden in the late 1990s. Researchers found that 41 percent of the spaces were of "marginal utility," and half of the buildings that included POPS were somehow breaking the rules. Prior to the Comptroller's report, the only thing approaching a current public accounting of where POPS are and what's happening with them was a website managed by Kayden.

Kayden said in an email that he is not surprised that little has changed, "because the institutional changes necessary to fix the problem have not taken place."

The dire state of the program has been in the news in recent years thanks to abuses by the Trump Organization at Trump Tower. The building's lobby is supposed to be open to the public daily from 8 a.m. to 10 p.m., and the terraces are supposed to be accessible when the retail outlets in the building are open. In the lead-up to the election, the DOB fined the Trump Organization three times ($14,000 total) for removing a bench near the lobby entrance and replacing it with kiosks hawking Make America Great Again swag.

Trump management replaced the bench last July, but when Gothamist visited in December, a sign indicated that the fourth-floor terrace was "CLOSED DUE TO CONSTRUCTION." There are no permits on file for terrace work.

Activists with the ACORN-spawned New York Communities for Change and other groups have been putting the fifth-floor terrace to the test in recent months with a series of protest teach-ins covering climate change, the developer-friendly 421-a tax break program, and the concept of a carbon tax. The first time that demonstrators tried to gather on the terrace, Trump employees called police and tried to talk them into leaving, according to NYCC senior advisor Pete Sikora.

"At one point there were 15 or 20 security and police in there trying to get us out," he said. "We held our ground and they did not insist that we leave."

Attendees of the second demonstration in mid-March, a week after the apocalyptic snowstorm that wasn't, found the terrace locked. The snow had not yet been removed, security explained.

"There was no snow on the sidewalk in front of the building," Sikora said. "The parts of Trump Tower that they wanted to plow, they did it immediately."

For a taste of the maddening response one can encounter when trying to access this allegedly public space, here's video of Councilman Jumaane Williams, lawyer Sam Cohen, and others trying to negotiate access with police and Trump security.

The third teach-in found the terrace closed because of rain. Trump personnel opened it long enough for the group to hold its event, then relocked it when they left, according to organizers.

"Donald Trump is a billionaire real estate developer who is epically ignorant and doesn't care about anything but himself. It's not surprising that he would go back on the deal," Sikora said. "If the Trump Organization could close the space entirely, they would. At the same time, it shouldn't take a lawyer and scads of protesters and councilmembers to show up to have access to the space." 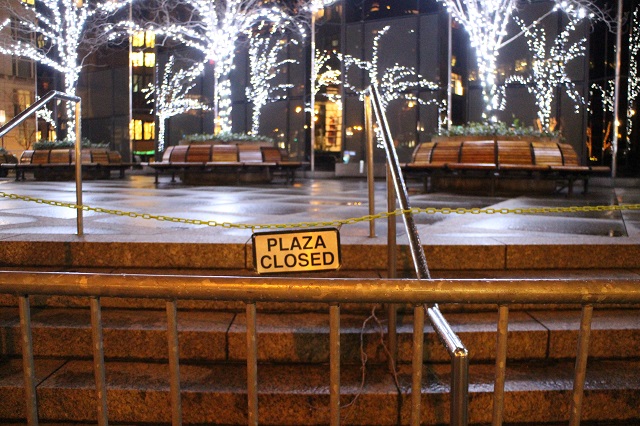 A large section of the plaza around Trump International Hotel and Tower was inexplicably closed when we visited in December. (Nathan Tempey/Gothamist)

The plaza on the west side of the Trump International Hotel and Tower at Columbus Circle was also inexplicably barricaded off when we visited in December.

Another space singled out by the Comptroller's Office is the lobby at 101 Barclay Street, owned by Bank New York Mellon. According to auditors, "the POPS is entirely closed to the public, and auditors who attempted to inspect the site were stopped, prevented from taking photographs, and escorted to the security office where they were questioned. Building security informed auditors that this lobby had been closed to the public for at least 15 years."

Bank of New York Mellon spokeswoman Ligia Braun did not directly address the violations of the agreement, which allowed the building to be taller and set back less from the street than it would have been otherwise, but she wrote in an email, “The safety and security of our employees, clients, vendors and others in the building are our first and foremost priority. Given our building is immediately adjacent to the World Trade Center complex, we increased security measures following the events of September 11. We re-examine our security protocols on a regular basis to best balance safety and public access."

She declined to answer whether the company intends to hold up its end of the bargain at any point in the future.

The Comptroller's Office recommended that the Department of Buildings create a system to proactively inspect all POPS regularly and check to ensure that they are being run according to requirements. In its response to the audit, the DOB wrote that it won't change away from a complaint-driven inspection system, and can't schedule inspections to correspond to the season when a given POPS is most used.

A DOB spokesman said that the agency does not have the resources for more proactive inspections, but emphasized that the DOB sent inspectors to the 58 locations where the agency got complaints over the last years, and issued 18 violations to owners of 10 of them. He explained that POPS violations are not a top priority because they do not pose a public-safety risk, but said that inspectors typically respond within 26 days of a complaint.

"Since the start of this administration, DOB has significantly reduced response times to POPS complaints," DOB spokesman Joe Soldevere said in a statement. "As we continue to drive down these response times, we are making long-overdue improvements to hold accountable property owners who ignore the rules and fail to honor their agreements. We are determined to keep these spaces open to the public."

A City Council bill introduced last summer calls for the Department of City Planning to report twice annually about the status of each POPS in the city (without inspecting them), and create and maintain a map of the spaces, and for the DOB to report annually on complaints and violations regarding each space and whether the department authorized any closures. That bill has been sitting in committee since shortly after its introduction.

Councilman Mark Levine, who spoke at the first Trump Tower teach-in, said that the system for keeping developers to their promises about POPS is broken.

"These kind of open spaces can help with anything from public safety to public health to community building," he said. "First and foremost it's a promise that was made by the developer. We shouldn't need to justify at this point why the spaces are important. We need to have the resources to enforce it."