With college grads facing at least $25,000 in debt after graduation, some prospective students are opting to turn down expensive, prestigious institutions. For instance, there's Daniel Schwartz, who was accepted to Cornell but decided to go to CUNY's Macaulay Honors College: The Wall Street Journal reports, "Mr. Schwartz says his family could have afforded Cornell's tuition, with help from scholarships and loans. But he wants to be a doctor and thinks medical school, which could easily cost upward of $45,000 a year for a private institution, is a more important investment. It wasn't 'worth it to spend $50,000-plus a year for a bachelor's degree,' he says." But isn't it worth $50,000/year to see Vinny at Columbia or to name drop Cornell like the Nard Dog?

According to the latest How America Pays for College report from Sallie Mae [PDF] following the 2010-2011 academic year, there was a sharp decline in the amount families are paying to send their kids to college—especially amongst the rich. A big factor in the change? More students are aiming for lower-cost and lower-tier schools.

The report (which surveys 1,600 statistically significant families each year) found that families from all income brackets spent 9 percent less on school this year than they did last year, averaging out to $21,889 in cash, loans, scholarships and other methods of payment. And this wasn't just the poor people cutting down on their bills, high-income families were leading the charge and managed to reduce their spending by 18 percent (to $25,760 per year).

The head of John J. Heldrich Center for Workforce Development at Rutgers University, Carl Van Horn told the Journal that students who opt for less "prestigious" schools shouldn't worry: "Graduate outcomes often have more to do with major and how a student takes advantage of networking and internship opportunities, than with school choice." So don't embarrassed yourself on Twitter or Facebook and hustle. 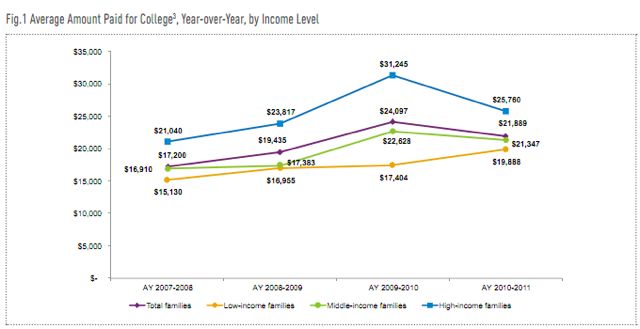