Report: Mets and Twins Agree to Deal for Santana 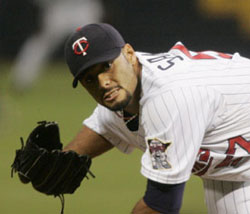 The Mets have finally landed a much needed arm to lead their rotation. USA Today is reporting that the Minnesota Twins and the Mets have agreed to terms for pitcher Johan Santana. The two-time Cy Young winner comes to the Mets at a high cost, with the Mets delivering outfielder Carlos Gomez and pitchers Phil Humber, Deolis Guerra and Kevin Mulvey to the Twins. Conditions of the deal include the Mets and Santana reaching agreement on a contract (rumored at six or seven year contract extension in the area of $150 million) and that Santana passes a physical. According to USA Today Santana and the Mets have between 48-72 hours to reach an agreement.

The addition of Santana would arguably give the Mets' pitching staff their first ace since Dwight Gooden.