Report: Majority Of MTA Board Members Are Millionaires From The 'Burbs

The MTA's ridership reflects the economic, racial and gender diversity of New York City. The MTA's board? Not so much. The majority of them are millionaires who live outside of the five boroughs.

Despite recent turnover, the MTA's board is still primarily composed of affluent suburbanites, who also skew whiter, older and more male than transit riders, according to a new report from Reinvent Albany.

After analyzing the required financial disclosures of the board, the good government group found that members make an average of $292,000 annually—about five times more than the average transit users' income of $58,000. The median known wealth of the group stands at $1.4 million, a figure that may be somewhat inflated by Nassau County representative David Mack's eye-popping $70 million net worth. Former Port Authority executive and current MTA Chairman Pat Foye is hanging on to a comparatively slim $11.8 million in wealth, according to the report.

The board has spent much of the past year kicking around ways to criminalize and publicly shame New York City residents who can't afford to pay for the subway or bus. 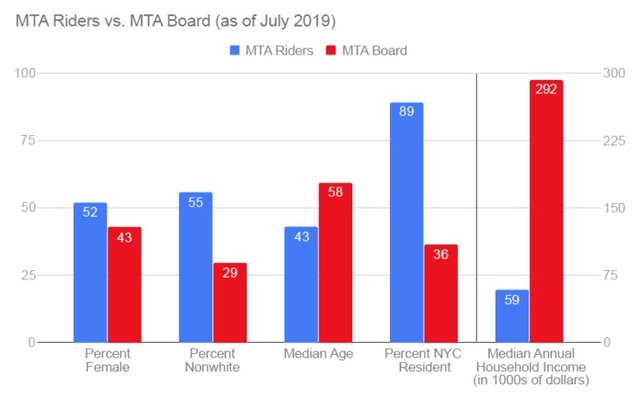 The analysis also found that if the board actually reflected the diversity of transit ridership, nine of its members would be nonwhite. Currently, that number is four. Similarly, women make up 52 percent of MTA riders, but remain in the minority on the board. There are no members of the board with a disability.

While the MTA's board is required by law to have 17 voting members, there are currently three vacancies, in part because of Governor Andrew Cuomo's reluctance to confirm appointees put forth by Mayor Bill de Blasio. Cuomo appoints a plurality of board members and exercises sweeping control over the body's decision-making, even as he frequently asserts that he does not control the MTA.

Perhaps most significantly, just five of the MTA's 14 voting members currently live in New York City, compared to 89 percent of MTA riders. And the influence of non-New Yorkers is growing; while members were previously required to live in one of the 12 counties served by the MTA, that rule was recently tossed aside in order to confirm Cuomo's latest appointee, distant upstate resident Robert Mujica.

Rachael Fauss, Senior Research Analyst and co-author of the report, told Gothamist that the city's under-representation on the board raises concerns about how the authority's capital plan will be allocated, and could mean riders "won't have as strong a voice to scrutinize the plan and make sure it fixes the system first."

A spokesperson for the MTA, Max Young, called those concerns "unfounded." Recent taxes levied by the state legislature are expected to generate $25 billion in MTA financing, of which eighty percent will be directed to New York City transit, he noted.

But according to Fauss, New Yorkers should push for a board the resembles ridership for a number of reasons, not least of which is that it would encourage investments that actually help transit users (as opposed to, say, shuttering dozens of stations for months or years at a time in order to install charging stations and other cosmetic upgrades).

"It's about priorities," Fauss said. "Just having people from New York City who ride the subway serving on the board will ensure the capital plan is actually improving service for riders."

#governor cuomo
#MTA
#mta board members
#reinvent albany
Do you know the scoop? Comment below or Send us a Tip