Report: Losing A Fraction Of NYCHA Housing Would Cause 'Permanent Damage' To NYC

Judging from press reports and court filings that catalog leaky ceilings, poisonous paint, and cat-sized vermin, it can seem as though NYCHA is beyond salvation. Despite these conditions, the country’s largest public housing stock is home to 5 percent of the city's population, and a crucial part of New York City’s social and economic fabric, a new report contends. And so, it says, NYCHA must be saved.

The Regional Plan Association (RPA) released the new report on Tuesday, which imagines the ripple effects of a world in which New York City Housing Authority (NYCHA) buildings continue to crumble away unabated. It likens the fortunes of NYCHA to the beleaguered MTA, while noting that it will actually cost more to repair NYCHA—at $45.2 billion—than it will to fix New York’s subway system.

And while the city’s new NYCHA 2.0 funding scheme is a start, far more must be done. This is no time to be miserly, the report argues, since fixing NYCHA is far better than the alternative.

The report plays out two hypothetical scenarios to show how losing even a fraction of the public housing stock might cause “permanent damage to our city," arguing that while fixing NYCHA is expensive, not fixing NYCHA would “irrevocably change our city for the worse.”

In the first scenario, 10 percent of the city’s public housing, or about 17,000 apartments, are declared legally uninhabitable (by a fire marshal, for instance). The city’s homelessness rate skyrockets by 62 percent, climbing to 100,000. Sheltering the additional 40,000 people would cost the city and state $700 million and require 200 additional homeless shelters.

In the second scenario, one-third of NYCHA’s housing is declared uninhabitable. New York City’s homeless population is now equal to the entire population of Salt Lake City—or about 200,000—and each of the 189 city neighborhoods would require 3 additional homeless shelters. Sheltering all these homeless people would cost the city $3 billion dollars a year.

“Without change in the way we fund, manage, and maintain our public housing, these hypothetical scenarios will come closer and closer to being a reality,” the report warns.

Victor Bach, senior housing policy analyst at the Community Service Society, praised the report for its call to action, but worried that many NYCHA apartments are already uninhabitable, given the reports of inadequate inspections by HUD and NYCHA’s own admissions that it systematically misled federal inspectors.

“My suspicion is that if some NYCHA buildings were inspected carefully, it’s possible a vacate order would have to be issued because of the number of violations and conditions in those buildings,” Bach said. “How many of our public housing units are at risk in that sense? I really can’t estimate. But I suspect some are.”

A NYCHA spokesperson declined to comment on the issue. 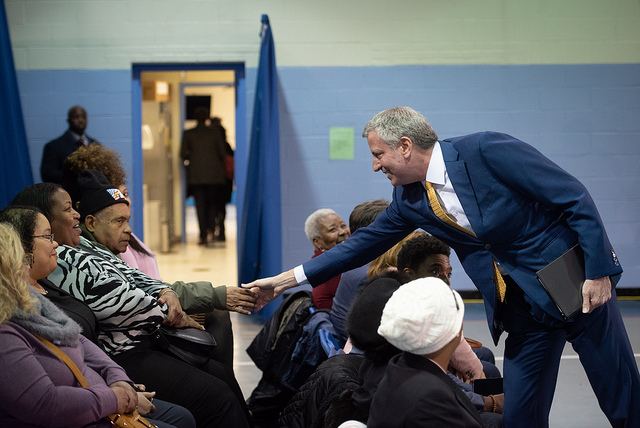 When asked to imagine the impact that NYCHA completely disappearing might have, Bach said, “It would be on a different scale, but it would be like the Syrian diaspora. I think we would have a tide of displaced residents who could not find comparable or affordable housing in the city, would be homeless, or doubled up with friends or family, or living somewhere else beyond the city boundaries.”

The disappearance of even a small proportion of the 322 public housing developments would reverberate through rental markets, the city budget, and city service providers, Wright said. What happens to NYCHA “will effect everyone else’s quality of life and the prosperity and social equity of the region,” he warned.

The city is “reviewing the report and its conclusions,” a NYCHA spokeswoman said.

NYCHA is home to a disproportionate number of city workers, particularly in transportation, education, manufacturing, retail, and healthcare. The largest employer of residents is the NYC Department of Education. In addition, nearly half of New York City’s senior centers and many pre-K programs are located in NYCHA buildings as well. Any loss of these residents or spaces would dramatically affect the city they help to run, the report argues.

“In large swaths of the city, NYCHA is the only thing preserving economic diversity in neighborhoods,” said Charles McNally, spokesman for NYU’s Furman Center, which released its own report on Monday, focusing on NYCHA’s unique role as the primary housing source for the poorest city dwellers. That report noted that over 107,000 of NYCHA’s 174,000 units, or 61 percent, are home to “extremely low income” families—in New York City, this means a two-person household earns less than $25,050 a year. So while the average New Yorker pays $1,595 a month in rent, the average NYCHA resident pays just $601, based on 30 percent of their income.

But the housing authority is already plagued by deteriorating conditions that threaten its habitability, with pervasive mold, rats, lead paint, and unreliable heating systems compounded by years of mismanagement and disinvestment at all levels of government. A federal judge recently rejected an initial plan to fix NYCHA’s problems. While officials rush to finalize a new deal, the spectre of a federal takeover looms—an arrangement that would leave the fate of nearly half a million New Yorkers in the hands of President Trump’s HUD Secretary, Ben Carson. City Hall has been waging a public relations campaign to stave off that possibility, with a talking points memo arguing that “direct federal control would be disastrous.”

While the RPA report presents dire visions of NYCHA’s future, its authors believe there is still time for NYCHA to correct its past mistakes before a January 31 deadline. But if it does not, Secretary Carson, who today met with de Blasio and visited NYCHA, has made clear that he will decide its future.