Report: "Killing A Person With A Car Is Acceptable" In NYC

Thousands of drivers in New York City are injuring and killing their fellow New Yorkers and the city's District Attorneys are letting them get away with it.

According to a report issued by Transportation Alternatives, fewer than 1% of the drivers involved in roughly 4,000 hit-and-run crashes this year that resulted in injury or death were charged with a crime.

"Not a single one of the DAs offices is really doing its job when it comes to holding dangerous and reckless drivers accountable," said Paul Steely White, the executive director of Transportation Alternatives.

The report notes that while alcohol was a factor in 897 crashes that resulted in death or injury last year, roughly 10,000 drivers were charged with DWI.

Meanwhile, drivers who failed to yield caused 5,966 other crashes resulting in death or injury over the same time period, and fewer than 40 of them were prosecuted for it.

There are seemingly plenty of laws at prosecutors' disposal should they choose to charge dangerous drivers.

Mayor de Blasio signed the Right of Way Law last summer, which makes failing to yield and striking pedestrians and cyclists a misdemeanor.

To date in 2015, 24 drivers have been charged with misdemeanor failure to yield for injuring or killing pedestrians, according to figures provided by the Mayor's Office.

A law making it a misdemeanor for drivers to fail to "exercise due care"—also known as Hayley and Diego's law, after two children who were killed in Chinatown after being struck by an idling delivery van driver—was passed in 2010. Over the last two years, city prosecutors have used it a total of eight times, according to the report.

Elle's Law, named after a 6-year-old girl who was struck and severely injured by an SUV while walking in a crosswalk with her nanny on the Upper East Side, creates a felony and automatic license suspension for drivers who cause serious physical injury to pedestrians.

Prosecutors haven't used Elle's Law once in two years, according to the report.

"The DAs are just not present for a whole class of serious injury and critical injury cases," White says. "They're just not paying attention." 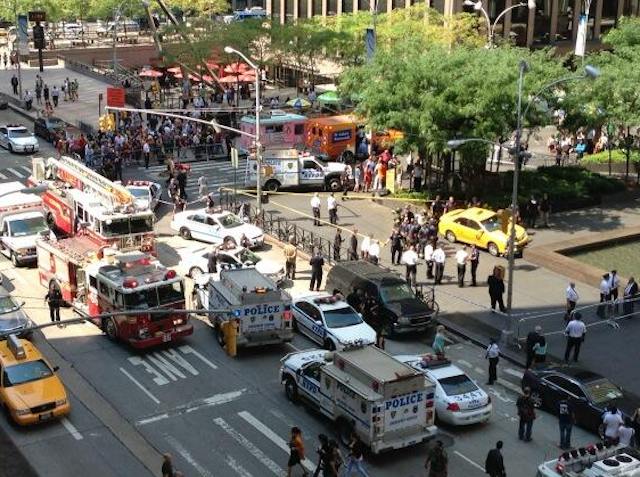 In 2013, cab driver Mohammed Himon jumped the curb outside of Rockefeller Center and struck tourist Sian Green, causing her foot to be amputated. Despite giving an interview to the Post in which he admitted he was enraged at a cyclist when he hit Green, Himon was never charged by Manhattan DA Cy Vance Jr.

While there are discrepancies in the crash data [PDF] between the NYPD and the DMV, the report notes that Transportation Alternatives asked the city's DAs offices for a list of fatal crashes they prosecuted. "None of New York City’s District Attorneys are tracking or documenting cases where people are killed by lawless driving," the report states.

In 2013, the NYPD testified at a City Council oversight hearing that the DAs play a unique role in crash investigations. Unless a driver is intoxicated or leaves the scene of the crash, the NYPD's Collision Investigation Squad consults with the DA before making an arrest.

"There's a lot of case law that has developed around the issue of whether or not vehicle accidents can be subject to criminal action," NYPD Legal Affairs Assistant Commissioner Susan Petito said at the time. "The DA is a critical part in this. They will be able to tell us whether or not the case is prosecutable under a lot of case law that is developed separate of the penal law."

White and the report praise Manhattan DA Cy Vance Jr. for his "aggressive prosecutorial leadership" and for winning a rare homicide conviction this year against the cab driver who struck and killed Jean Chambers in an Upper West Side crosswalk.

But the report also notes that Vance "places traffic violence as a priority well below
cybercrime and money theft, even though traffic is the leading cause of injury-related death for New York City children."

“While we may not agree with all of the findings in this report, we appreciate TA’s dedication to this issue and will continue to seek ways to work with them to ensure NYC’s streets are safe," Joan Vollero, a spokeswoman for Vance, said in response.

Brooklyn DA Ken Thompson is graded similarly in the report, and is also criticized for refusing to "take a strong public stance, despite preventable fatalities on the streets of Brooklyn."

This week, Thompson charged the driver who jumped the curb in Fort Greene and killed Victoria Nicodemus with two charges related to driving without a license, both misdemeanors.

“In Brooklyn we are committed to protecting pedestrians and holding drivers accountable for injuries and deaths caused by their reckless driving," said a spokesperson for Thompson, who pointed out that Thompson has created a "Driver Accountability Task Force."

"We work aggressively within the current laws to prosecute drivers who engage in criminal acts, which unfortunately is often difficult as the courts have established tough standards for such prosecutions," the spokesperson added.

Queens DA Richard Brown "has shown a middling effort to participate in Vision Zero," Transportation Alternatives says. Brown refused to bring any charges against the driver who killed 3-year-old Allison Liao as she crossed Main Street in Flushing with her grandmother. Recently, a spokesperson for Brown told us that an MTA bus driver who struck and killed a 69-year-old woman in a Forest Hills crosswalk would not face any charges.

“Contrary to the report’s conclusions that are narrowly drawn based on Transportation Alternatives’ interpretation of statistical data, the Queens District Attorney’s Office takes very seriously its responsibility to investigate and prosecute drivers whose criminal conduct results in death or serious injury on the roadways of Queens County," Brown said in a statement.

That being said, prosecutors are sworn to follow the law. No matter how tragic the incident and no matter how much sympathy we have for victims and their families, we cannot base a prosecution on those feelings. In every vehicular crash brought to our attention we must evaluate the driver’s conduct in terms of criminal liability. There are occasions when crashes occur which are not the result of criminality. Some may disagree with that determination and it is their right to do so but our oath requires us to follow the law and not the opinions of others however heartfelt those opinions may be.

Bronx DA Robert Johnson, who essentially (and cynically) hand-picked his successor, Darcel Clark, "has shown little interest in growing their institutional dedication to saving lives in traffic," the report states.

This fall, Johnson's office declined to charge an Uber driver who jumped the curb and struck a crowd of children.

"Transportation Alternatives sent us an advance copy of their interpretation of the efforts of the NYC DA Offices to address traffic crimes. Quickly reviewing their conclusions, we are troubled by some startling misapprehensions of the role of the District Attorney generally and the actions of these offices in specific cases," a spokesperson for Johnson said.

"Such misinformation and lack of clarity is even more troubling given the extensive cooperation, information and education these offices have given Transportation Alternatives over the last two decades and our current repeated attempts to respond to their inquiries."

The Staten Island DA's office, led by Daniel Master Jr. after Dan Donovan left for a Congressional seat, fares the worst in the report, as the number of pedestrians killed in the borough "has remained unchanged for 30 years."

In a 592-word statement, the office insists that it is "quite aggressive in regards to vehicular crime prosecutions," though it does not cite any specific examples.

"The Staten Island portion of the so-called “Justice Denied” report issued today by a self-appointed advocacy group calling themselves Transportation Alternatives is seriously flawed," the statement begins. You can read it in its entirety here.

"We've passed new laws, the NYPD is collecting more evidence than ever, now we need the DAs to do their job and bring these dangerous, deadly drivers to justice," White says. "The ball is squarely in the DAs' court."