More homeless New Yorkers died during the last fiscal year than any other year since 2006, according to new data from the Department of Homeless Services. Advocates and city officials said that the increase is likely due, in part, to a concurrent increase in the size of New York's overall homeless population. Since last fall, the shelter population has hovered around a record 60,000 individuals. That's not including the harder-to-track street homeless population, homeless who use drop-in shelters, and homeless who may stay with friends or family.

The advocacy group Coalition for the Homeless advocated for DHS to start tracking homeless deaths in shelters and on the street back in the aughts. Deputy Policy Director Shelly Nortz said Monday that the latest numbers can only be a lowball, since homeless people aren't necessarily on the city's radar when they die. Some people use aliases, others may not have a next of kin. "It's an imperfect thing," Nortz said. "But it's helpful nonetheless."

With the data, she said, both advocates and city agencies can note what causes of death seem to be increasing, and take measures to address those specifically.

The leading cause of death last fiscal year, according to the report, was drug overdose. A total of 61 people died of an overdose last fiscal year, up from 45 the year previous. While the data doesn't separate out deaths related to fentanyl—a clinical drug that is less expensive than heroin and 50 to 100 times more potent than morphine—or K2, homeless advocates say both drugs are dangerous, inexpensive, and attainable, and have seen an upsurge in popularity in recent years. Not just in the homeless population, but in the city as a whole.

Last summer, the Department of Health reported that opioid deaths had more than doubled since 2010. Around the same time, dozens of people were hospitalized in Brooklyn after smoking a bad batch of K2. Though the chemical-laced potpourri has not been officially linked to many deaths in recent years, it prompted more than 6,000 emergency room visits between summer 2015 and last July.

According to Politico, which first reported and graphed the latest death statistics, homeless deaths have been rising since 2011, when the documented total was 157. Rates fluctuated between 2006 and 2011, but were still less than last year's total.

"It doesn't sound to me like an alarming increase," Nortz said. "I would be very, very concerned if the number had gone up very dramatically."

Still, Nortz added, "The data does reflect the presence of the fentanyl and K2 problems. And those are very real problems. And it's sobering." 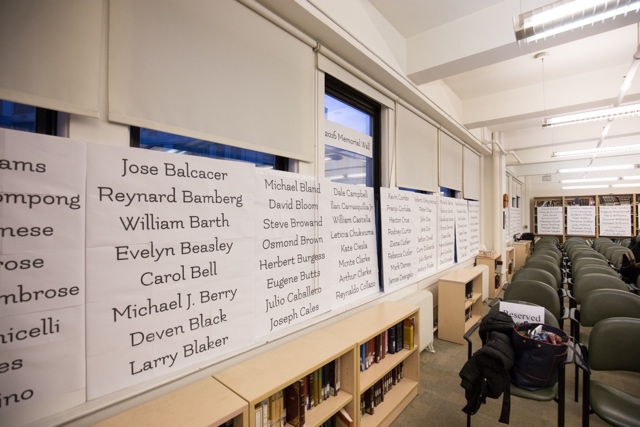 The names of some homeless men and women who died in NYC last year (Sai Mokhtari / Gothamist).

Fewer homeless people died of exposure last year than the year previous, according to DHS: two, down from five in FY 2015. The Mayor's Office attributed this decrease to the HOME-STAT program, which instated more frequent canvassing of homeless populations in Manhattan.

"The report documents our successful efforts to bring more New Yorkers off the streets, which led to a decrease in the number of deaths from exposure," said Mayoral spokeswoman Jaclyn Rothenberg.

A DHS spokesman also said that the agency trained shelter staff in how to administer Narcan—which can revive a person experiencing an opioid overdose—after the FY 2016 data came down last summer. Narcan was administered 112 times last year, and reversed 94 overdoses.

"Nearly every Department of Homeless Services shelter now has staff trained to administer life-saving Narcan to prevent overdoses, with another training happening in February," said DHS spokesman Isaac McGinn in a statement.

Advocates maintain that stable, permanent housing is the best cure for the mental and physical stress that homelessness exacts. This week, Nortz called on Governor Cuomo to release promised funding towards 35,000 units of supportive housing—apartments for homeless individuals with accompanying health services. "That's just got to happen on a scale and at a pace that addresses this level of need, because otherwise we'll just go year to year with more people dying in the streets," she said.

#andrew cuomo
#deaths
#dhs
#homelessness
#mayor de blasio
#original
Do you know the scoop? Comment below or Send us a Tip