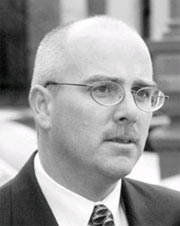 The alleged rape took place on July 8. A 52-year-old woman claims that Gallagher took her back to his Middle Village office and sexually assaulted her. The 43-year-old Gallagher cooperated with the police, giving a DNA sample. He is married, but his neighbors say he and his wife fight frequently.

The Daily News reports that the accuser suffered "vaginal abrasions, abrasions on both knees" which Gallagher explained as being from an encounter on the carpet. He also said that the woman was upset because "he indicated the encounter was a one-night stand." But she tells the News, "I'm just out for justice. I have nothing to gain by lying. He's got everything to lose. He shouldn't get away with this just because he's a politician."