Rapidly gentrifying neighborhoods including Crown Heights and Central Harlem have experienced a business boom in the last fifteen years, but the influx of economic activity has not translated into adequate job opportunities for local residents, according to a new report from Comptroller Scott Stringer's office.

The Furman Center has designated fifteen gentrifying neighborhood areas, all of which were low-income in 1990 and have since experienced significant increases in average rent. Of the top-ten neighborhoods for small business growth in the last ten years, nine are gentrifying. Of these, seven are still considered low-income, meaning average income is in the bottom 40 percent city-wide.

These neighborhoods—including Central and East Harlem, Crown Heights, Prospect Heights, Bed-Stuy, Bushwick, Brownsville—also have among the highest unemployment rates in the city, according to the report.

There are racial disparities within the unemployment category.

"As the jobs landscape changes, we need to do everything possible to support those who helped build their communities in the first place," Stringer said in a statement Tuesday. "To avoid pricing people out of their own neighborhoods, we need to deliver real, meaningful, local wealth creation." 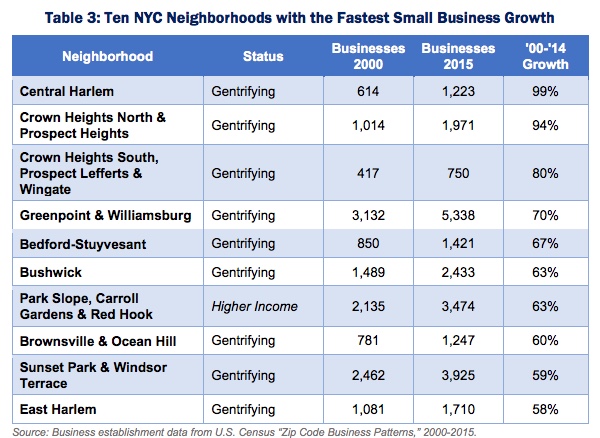 The comptroller also looked at a broader category of 22 NYC neighborhoods designated low-income, including some that are not also gentrifying by Furman standards (Highbridge and Concourse in the Bronx, for example). In 2000, there were 29,444 businesses across these 22 neighborhoods. By 2015, that number had jumped 41 percent, to 41,640.

The vast majority of new businesses in these neighborhoods are small: 82 percent of them have fewer than ten employees, according to the report. The industry with the most growth in these neighborhoods, "accommodation and food services" (hotels, coffee shops, restaurants), is low paying, with an average wage of $21,538 per year.

Overall unemployment in low-income neighborhoods decreased between 2011, a recession peak, and 2015: from 12 percent to the current 7.9 percent.

Stringer's report includes recommendations for connecting more local residents with jobs, including a new "network coordinator" in each community district assigned by the Mayor's Office of Workforce Development.

#gentrification
#Job Growth
#scott stringer
#Unemployment
#original
Do you know the scoop? Comment below or Send us a Tip