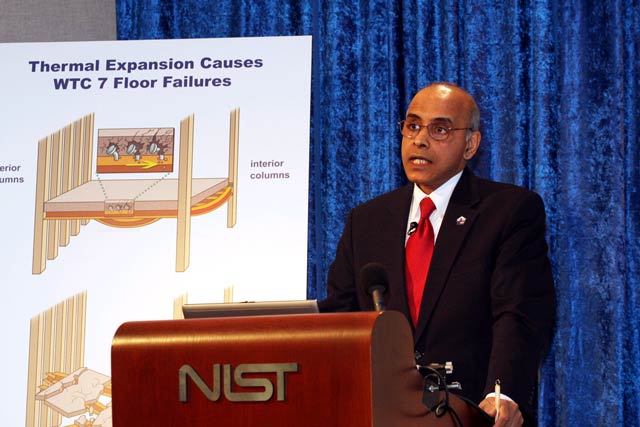 Above photograph of Shyam Sunder discussing the NIST report on 7 WTC collapse by Don Berkemeyer; below photograph of the destroyed 7 WTC from the AP 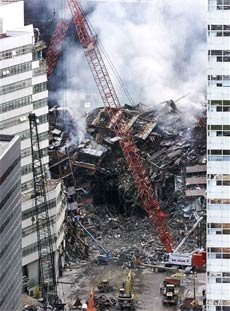 One of the lingering conspiracy theories surrounding the attacks on September 11, 2001 is that 7 World Trade Center, which was not hit by a plane, was deliberately destroyed (here's one example of a conspiracy website), because no other steel building has collapsed simply due to fire before. But now a report from the National Institute of Standards and Technology says that the fire is the culprit.

Lead investigator Shyam Sunder said, “Our study found that the fires in WTC 7, which were uncontrolled but otherwise similar to fires experienced in other tall buildings, caused an extraordinary event. Heating of floor beams and girders caused a critical support column to fail, initiating a fire-induced progressive collapse that brought the building down.” And referring to the fuel stored at 7 WTC, he added, "Video and photographic evidence combined with detailed computer simulations show that neither explosives nor fuel oil fires played a role in the collapse of WTC 7." The fires were started when debris from the World Trade Center towers fell onto the lower building.

The key factor contributing to the collapse is "thermal expansionof long-span floor systems at temperatures 'hundreds of degrees below those typically considered in current practice for fire resistance ratings.'" In other words, building owners, check your buildings. The report suggests that if a water main had not been broken due to the collapse at the Twin Towers, the sprinkler system at 7 WTC would have prevented the building's collapse.

You can read NIST's full report here (PDF). Former mayor Rudy Giuliani had placed his emergency command center at 7 WTC, in spite of NYPD recommendations against doing so.