Propelled by the city's ongoing affordable housing crisis and a steady rise in homeless single adults, the city’s homeless levels reached a record-breaking peak in January, with nearly 64,000 men, women, and children spending each night in a New York City shelter, according to a new report by Coalition for the Homeless.

Of that total, the report reveals that more than 18,000 were homeless single adults, a population that has more than doubled over the last decade, accelerating to grow by an average of 10 percent per year since Mayor Bill de Blasio took office in 2014. 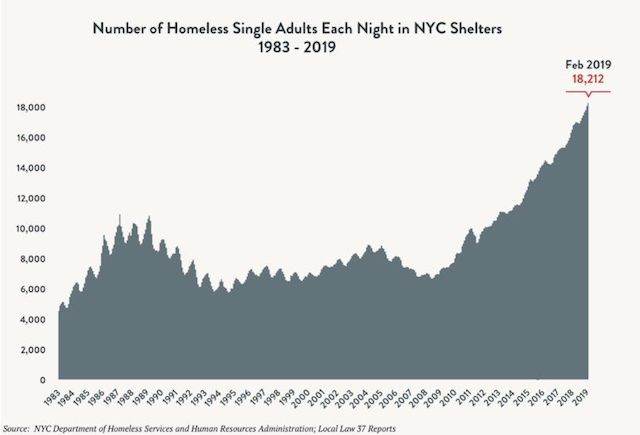 Source: Coalition for the Homeless report

The annual report, which was released on Tuesday, offered a withering assessment of de Blasio’s handling of homelessness, maintaining that in the face of staggering shelter numbers, the mayor had developed a meager goal of reducing shelter residents by 2,500 people between 2017 and 2022. In an often-leveled criticism of the city’s affordable housing priorities, the report also blamed the mayor for failing to incorporate more permanent housing for the homeless as part of his broader initiative to construct or preserve 300,000 affordable units by 2026.

“Mayor de Blasio’s hollow plan to address the crisis, Turning the Tide on Homelessness, has floundered, failing entirely to live up to its title,” the report said, referencing the mayor’s signature policy initiative.

Giselle Routhier, the policy director for the Coalition for the Homeless and the report's author, said the group made a concerted effort this year to call out the mayor on his housing plan, which designates only 5 percent of new housing—15,000 units—for homeless households. Under a program initiated by Mayor Edward Koch in 1985, the city designated 10 percent of affordable housing to the homeless at a time when the problem was not as acute.

"We’ve reached a level of record homeless that is so high and so sustained that Mayor de Blasio as a progressive mayor needs to take bold solutions that no other mayor has done before," Routhier told Gothamist.

Although de Blasio has committed to creating new 90 new shelters and expanding 30 existing sites, Routhier argued that permanent affordable housing for the homeless is a critical piece of the puzzle. "The reality is people spend more than a year in shelters because there is no housing for them to relocate to," she said.

In 2018, out of 34,488 newly constructed affordable housing units, 2,400, or 6 percent, were set aside for the homeless. Going forward, the Coalition has said, the city needs to significantly raise its goal and build 24,000 new units of deeply subsidized affordable housing and set aside at least another 6,000 units of existing housing.

Mayoral spokesperson Jane Meyer responded: “We are implementing the most aggressive affordable housing plan in New York City history. More than 109,000 New Yorkers have received rehousing assistance to move out of or avoid shelter, and we have financed over 10,200 homes for homeless New Yorkers. The shelter census is flat for the first time in a decade, and we will continue to use every tool at our disposal including cluster conversions to ensure all New Yorkers have a safe, affordable permanent home.”

The Coalition's critique of the mayor speaks to a larger complaint about how the city has allocated affordable housing. Under de Blasio, the bulk of affordable housing has thus far been for those making between 51 percent to 80 percent of the area median income, or from $36,550 to $58,480 for an individual, according to figures from the city Department of Housing Preservation and Development. Last year, Comptroller Scott Stringer said the city needed to realign its targeted income brackets to help those in the lowest income bracket, who are also the most vulnerable to becoming homeless.

Although the city has said homelessness is on a downward trajectory, the Coalition predicted that under current conditions the shelter population could actually climb to more than 65,000 by 2022, based on current trends. 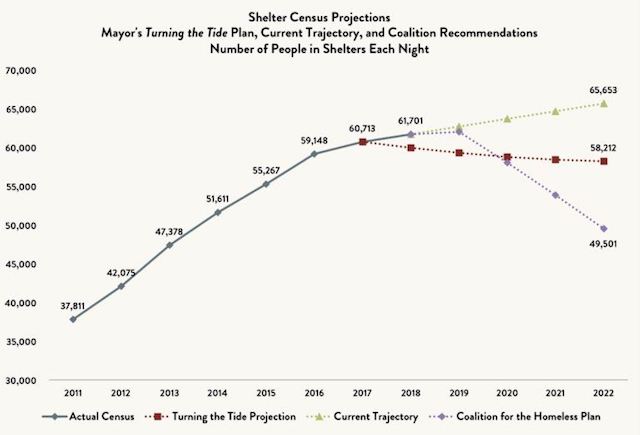 Source: Coalition for the Homeless report

The report also faulted Governor Andrew Cuomo for failing to provide the city with adequate funding and support in the form of rental subsidies, as well as contributions to shelter costs and capital repairs. In 2018, the state contributed $23.7 million, 14 percent of the total $173 million cost of local rent subsidies. That contribution was lower than the amount provided by the federal government, which kicked in 16 percent. The city contributed 70 percent.

Among its recommendations, the Coalition has urged the governor to pass legislation to create a state-funded, long-term rent subsidy for households on public assistance that are homeless or at risk of losing their housing due to eviction, domestic violence, or hazardous housing conditions.

“We know it’s the job of advocates to put their best case forward, but let’s be intellectually honest," replied Rich Azzopardi, a senior advisor to Governor Cuomo. "Fighting homelessness requires a holistic approach that’s why we are raising the minimum wage to $15 an hour, expanding access to health care, spending $200 million a year to combat addiction the breaks apart [sic] so many families and are cracking down on source [sic] of income discrimination. That’s in addition to our $20 billion affordable housing plan, which is creating or preserving 100,000 affordable homes and 6,000 units with supportive services.”

In another troubling finding, the report called out the state for increasingly allowing parolees from state correctional facilities to move directly into city homeless shelters without adequate counseling and housing planning. In 2018, 53 percent of individuals released from state prison were sent directly to New York City shelters, up from 23 percent in 2014.

The report also highlights the continuing crisis of homelessness among children, which is still near record levels. The problem has affected the very youngest—in 2017, more than 1,000 newborns were taken direcly from the hospital to a shelter. During the 2017-2018 school year, the number of New York City school children experiencing homelessness reached a record high of 114,659.

#andrew cuomo
#bill de blasio
#Coalition for the Homeless
#homelessness
#Turning the Tide
Do you know the scoop? Comment below or Send us a Tip