In the weeks since Governor Andrew Cuomo unveiled his miracle cure for the L train shutdown—supposedly allowing the MTA to forego a full tunnel closure in favor of less disruptive and "highly innovative" approach—much of the narrative has focused on the transit authority's apparent incompetence. How had the MTA missed a solution so self-evident that a group of academics managed to discover it a few weeks after visiting the tunnel for an hour? Had the agency seriously never considered just...not demolishing the bench wall? Are they TRYING to make our lives worse?

A new report suggests that may not be the case, at least as it applies to the Canarsie Tunnel. According to two PowerPoint presentations obtained by the Times, Cuomo's big idea—basically: slinging the electrical cables along the tunnel's walls, instead of burying them in the tunnel's duct bank—was rejected five years ago by engineers and consultants as being too dangerous.

The first presentation was prepared by Parsons Brinckerhoff, the consulting firm, now known as WSP, which is now overseeing the new plan. Back in 2014, the group warned of a slew of reasons that the cables should not be hung on the walls. Such an approach, they predicted, would "require excessive anchor bolt penetrations" that could potentially damage the lining of the 100-year-old tunnel. 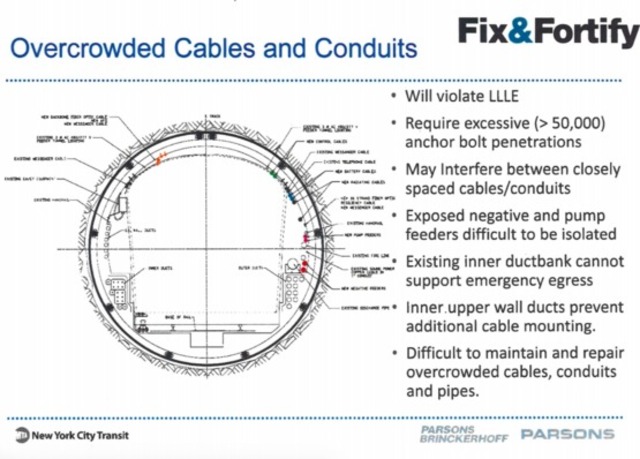 Moreover, the group found that attempting to complete the necessary repairs one tube at a time on weekends, as the MTA now intends, would result in "high risks of not being able to restore train services on time." As we reported last week, one of the major concerns is the presence of silica dust, exposure to which poses a serious health threat even in small doses.

In video repeatedly showed at public meetings in recent years, the MTA warned: "Even if we did shut down the tunnel for the weekend, we couldn't bring back normal service until the following Tuesday or Wednesday because of the time we'd need for the cleanup and silica testing."

While New York City Transit President Andy Byford told Gothamist that he expects a "vastly reduced" amount of silica dust, he conceded that a final determination can't be made until engineers conduct a full examination of the bench. So far, the alternate plan has included no mention of work extending beyond nights and weekends. 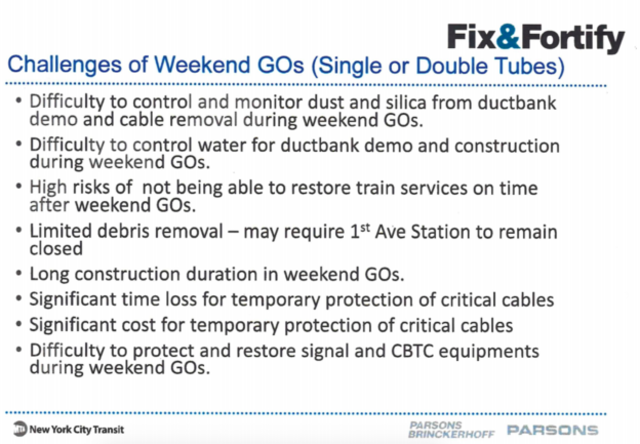 (obtained by the New York Times)

A second PowerPoint the following year prepared by the engineering consultant Jacobs also warned that "weekend construction is not acceptable," due in part to silica dust and impacts on service reliability. The approach of wetting the silica dust prior to hauling it out of the tunnel would be effective only about half the time, the report found, while completing the repairs on weekends would lead to higher construction costs, lower productivity, and several other drawbacks. 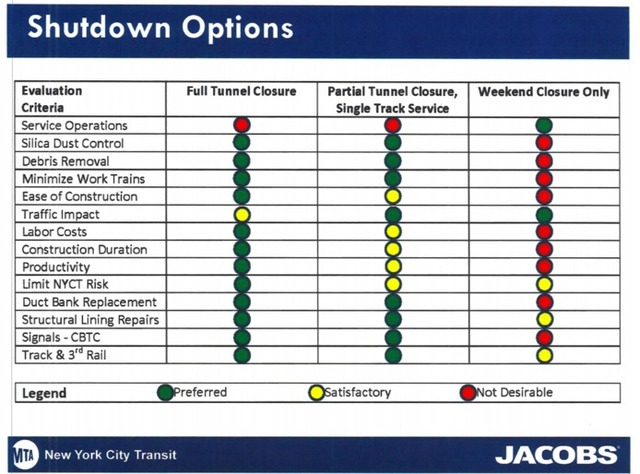 The MTA responded to the Times report by saying that Cuomo's new plan has significant differences from the one rejected in 2015.

Here’s a statement from MTA spokesman Shams Tarek in response to our story today about the L train:https://t.co/RCnKl4K5YD pic.twitter.com/CSuow6nksk

Still, these seem like a relevant set of facts, which for whatever reason the governor and his acting chairman of the MTA neglected to mention in their surprise announcement and subsequent press release stating the transit authority had "accepted" the new guidance. Thankfully, the governor last week called for an "emergency meeting," with the ostensible purpose of allowing a team of contractors to explain why the new approach is worthwhile.

Maybe they'll explain why they previously thought such a plan was unfit for the public. Or maybe not. Either way, you can watch a livestream here on Gothamist at noon (or: attend the meeting yourself at 2 Broadway).

#governor cuomo
#l train shutdown
#L train unshutdown
#MTA
#mta board
#wsp
Do you know the scoop? Comment below or Send us a Tip