The tree-cutting crew that dropped a tree on a Chinese food deliveryman in a Red Hook park on Monday, killing him, was not following basic rules for contractors, the Daily News reports. Delivery guy Jing Liu was cycling down Richards Street a block from his home base, the restaurant Ling Gee on Van Brunt Street, when the 4,000-pound London plane tree damaged by Hurricane Sandy came crashing down on him.

The News writes that the city required the firm RML Construction to use a four-person crew with a foreman, as well as to secure the area with cones and tape. Witnesses recounted that the two-man crew cutting the tree for RML in Coffey Park did not tape off the area or mark it with cones, and one said he heard no warning as Liu entered the fall area. What's more, the Carlstadt, New Jersey firm lists its specialty as paving and road construction, making no mention of tree removal. 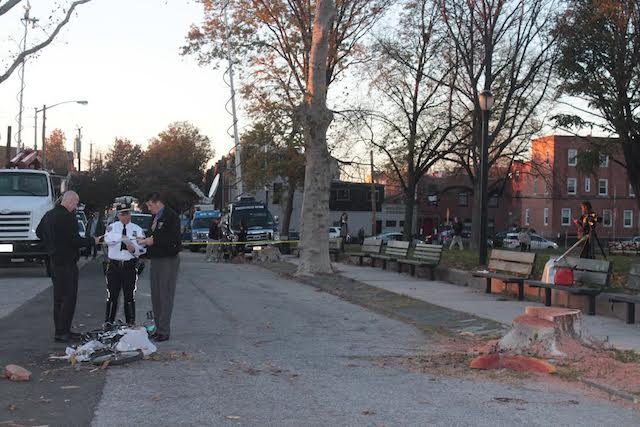 The Parks Department has suspended its contracts with the company pending a review, but a spokeswoman defended the choice for the Coffey Park job to the News.

"RML met all qualifications for the solicitation and contract for this project," Crystal Howard said.

NYC Parks Advocate head Geoffrey Croft has written that the department is notorious for its use of unlicensed arborists for tree-trimming. Tree Care Industry Association safety chief Peter Gerstenberger told the News that certification isn't essential, but that workers should be trained and competent.

"If indeed there were no barriers set up, nothing to warn or divert people, that’s definitely a violation of our industry standards," he said.

The NYPD is investigating the circumstances of the fatal tree-cutting. The News reported that one of the two men on the crew was working as a flagman, tasked with waving people away from the danger zone, but it is not clear where he was or what he was doing when Liu rode up.

An online fundraiser purportedly for Liu's family has raised $4,005 in four days, well over its goal of $1,000.