Mayor de Blasio's $41 billion plan to build and preserve 200,000 affordable apartments is geared toward for-profit developers who are trying to maximize their returns—if the rents are set too low or if the number of affordable units in the building is too high, the administration argues, nothing will get built.

"Land and construction costs [are high]," Deputy Mayor Alicia Glen told reporters this summer. "We don't have a gazillion city-owned buildings to put into the sausage maker. We have to be much more creative and work with the private sector."

But advocates argue that the for-profit model doesn't generate enough housing to accommodate the full third of the city's households who have an annual income of less than $35,000. The current homelessness crisis is a good indicator of what's at stake.

In a report published Friday [PDF], Public Advocate Letitia James argues that the city's tax lien sale—an annual event where the Department of Finance auctions off the right to collect outstanding tax debt on delinquent buildings to banks and private investors—is a lost opportunity for the de Blasio administration to fix up and preserve deeply affordable apartments.

The motivation for the sale, from the city's perspective, is to make back some of what it's owed in outstanding taxes on an annual basis. In the process, the report posits, the city is also perpetuating a cycle of apartment neglect and tenant abuse in a city in dire need of housing.

In some instances, James's office found, distressed buildings enter the tax lien sale multiple years in a row, compounding more and more fees and interest. (Nearly 2,000 vacant and tax-delinquent buildings across the city end up in the city's tax lien sale year after year, according to a recent report from Comptroller Scott Stringer's office.) These same buildings tend to fall into disrepair, and often harbor vacancies. 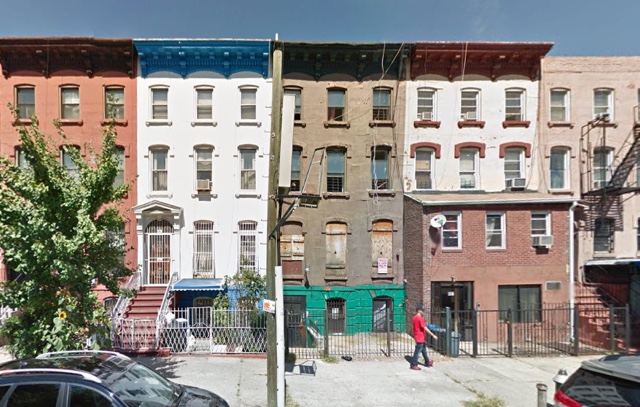 When the debt on these delinquent properties becomes untenable, landlords tend to sell. "The landlord flips the building, and the only people who are going to buy it are speculators who, in order to make their money back, are going to kick long time tenants out," said Cea Weaver, research and policy director for New York Communities For Change, a coalition of housing advocates that contributed research to the report.

For example, 468 West 145th Street in Hamilton Heights went through the tax lien sale for the fifth consecutive year last August, and is currently on the market for $1.7 million, even though the Department of Finance estimates its current value at $444,000.

Instead, James argues, the city should set up a so-called "Preservation Trust," which would channel some of the buildings in the tax lien sale to nonprofit developers committed to preserving them at affordable rents. The city would recoup less of the money owed, but advocates argue that tax revenue isn't the city's only priority.

Under the current system, buildings with five or more hazardous violations per unit can be exempt from the tax lien sale, and instead transferred to the Third Party Transfer Program for renovations (that program has preserved 5,000 units of affordable housing since the late 1990s). The report recommends that any building placed in the tax lien sale multiple years in a row, or that has accumulated three hazardous violations per unit, should be eligible for that kind of treatment as well.

James's report focused on 22 buildings across the city that have gone through the tax lien sale more than twice in the last four years, 19 of which contain rent-regulated units. Across all of the buildings, public records show, only 13 of a total 109 liens have been discharged, leaving over $2.5 million in active liens.

At 931 Fulton Street in Crown Heights, tree roots grew into parts of the exterior walls, causing them to split and leak. At 685 St. Marks Avenue, records show, defective plumbing caused inches of sewage to accumulate in the basement, drawing mosquito larvae. A full vacate order was placed on the building in 2011, and plans for a brand new eight-unit building on the site were approved this January.

"The city just sells off the tax liens, and then they do no due diligence," Weaver said. "Before this report, nobody had looked at what happens to the buildings after that. Instead of just allowing the Bank of New York Mellon and bondholders to collect a lot of money from these bad landlords, the city should use the opportunity to create affordable housing."

"We have found that the lien sale program is an effective tool to collect delinquent municipal charges," said Mayoral Spokeswoman Freddi Goldstein, adding, "HPD removes distressed properties from the lien sale where it can use its affordable housing programs, and will continue to look at how all available tools can be used to create affordable housing."

#affordable housing
#letitia james
#mayor de blasio
#tax lien sale
#vacancies
Do you know the scoop? Comment below or Send us a Tip