In case you forgot, people are saying there's a conspiracy afoot by City Hall bigwigs to transform this great city of ours from a traffic-choked nightmare full of cars to a traffic-choked nightmare full of cars BUT ALSO bikes and pedestrians. It's been a little while since anyone tried to dig deeper into this conspiracy, but local CBS reporter Erica Smith is here to skim the surface by asking, 'Bike lanes: What are they? Aren't streets for cars?'

Smith's segment is, ostensibly, Just Askin' Questions about the 60 miles of bike lanes that the city installed in 2016, and if they're even useful. After all, with a 350% growth in cycling between 1990 and 2015 (and the demand for more police parking only increasing) why would the city need more bike infrastructure?

The DOT says average motorist speeds in Manhattan below 60th Street have decreased to eight miles per hour in 2015, from nine miles per hour in 2010. The problem, according to CBS 2, is that there are just too many of these dang bike lanes. Not, as Eben Weiss points out, the tourist population in the city increasing by 11 million people in that time period or the 100,000 extra vehicle registrations in the city in the same time period. It's gotta be the bike lanes.

"Any" driver will tell you the same thing, according to Smith, echoing the "many" people who once thought that the danger of the Second Avenue bike lane was that terrorists could use it, as CBS 2 actually reported in 2011. However, even though drivers are apparently crashing their cars into each other to be the first ones to tell you how bad these bike lanes are, CBS only broadcasted the thoughts of one driver: Danny Quinn, a man who appears to blame traffic congestion on bicycles, not on people like, say, Danny Quinn, who drives around Manhattan without any passengers in his car while complaining about congestion.

.@ESmithTV WHO IS USING THESE BIKE LANES???

Smith ultimately wants to know whether people are using these bike lanes, despite the many shots of cyclists...riding bikes while she talks. Seriously, whoever edited this video seems extremely invested in torpedoing the argument while it happened. Clearly, The Bike Lobby's infiltration in our media goes deeper than we thought. After cutting to, for some reason, a shot of Smith on her iPhone while she sits in a van, she eventually delivers her final verdict with the immortal line, "Today we saw bike lanes in use. Other times, not so much."

And now, a word from their sponsor... 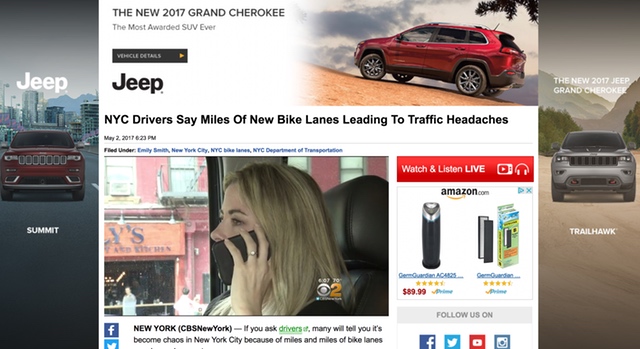 A CBS 2 report on drivers (okay, ONE driver) complaining about bike lanes was positioned with a takeover ad by JEEP.

I contacted the Department of Transportation for comment; they referred me to the cycling statistics part of their site.

Smith, for her part, seems to be suggesting she's actually helping cyclists with this hit job on bike lanes, because the streets are just too dangerous for bikes. 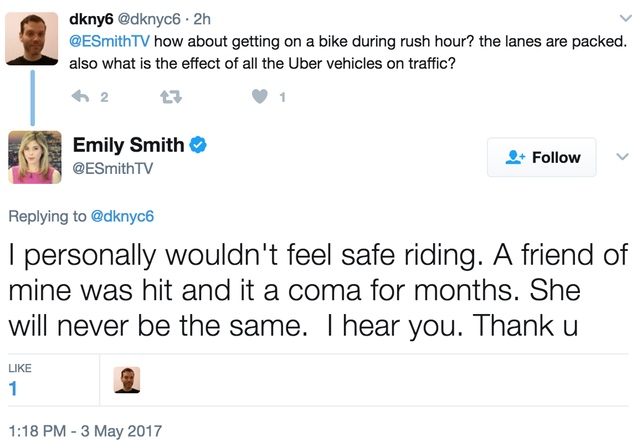 Reasonable people can disagree on how to best accommodate everyone on NYC's crowded streets, and it goes without saying that what happened to Smith's friend is horrible. But isn't the answer to safer cycling more complete street infrastructure that makes room for the city's booming bicycle ridership? The fact remains that as of January 2017, almost 800,000 New Yorkers said they were regular cyclists. Where, exactly, would Smith have them go?

#bikelash
#you never go full hapley
Do you know the scoop? Comment below or Send us a Tip
A new Gothamist is coming! We’ve moved comments over to our beta site. Click here to join the conversation and get a preview of our new website.