At least half a dozen11 New York City buses have been removed from service due to fears of a bedbug infestation, according to a new report from ABC7. [UPDATE BELOW]

City bus drivers tell the outlet that some of their buses have been crawling with bugs for the last three weeks, in part because the vehicles are apparently no longer fumigated on a regular basis. The MTA says they haven't confirmed the reports, but are taking some buses out of service as a "precautionary measure."

On Monday, six possibly besieged buses were isolated at the edge of the Kingsbridge Bus Depot in Inwood. Sources tell the MTA that some of the buses have been treated, while others have not. To avoid any possible confusion, the MTA has labeled the windshield of each bus: "Bed Bug." 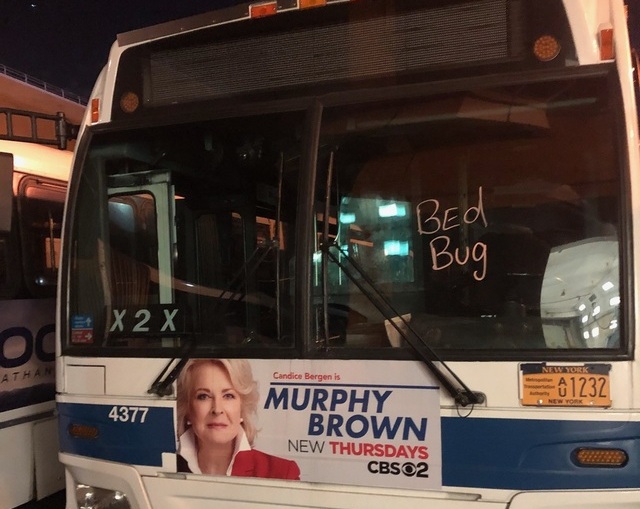 While the MTA is downplaying the incident, the authority's drivers say that an infestation on this scale is basically unheard of—and indeed, we don't remember having written about bedbug buses ever before. Subways, on the other hand...

"This is the most I've seen this year," Michael Enriquez, a bus operator and union shop steward with TWU100 told the outlet. "Usually we would never see buses knocked out for bedbugs. It seems to be an epidemic that's spreading."

"At one point in time our buses were regularly fumigated and there would be a sticker placed on the bus with a note that it was fumigated," Enriquez continued. "This practice seems to have ceased for whatever reasons."

We've reached out to the MTA to clarify whether or not the cleaning process has changed, and to see which routes were affected. We'll update if we hear back. In the meantime, here's the shocking moment a Philadelphia woman discovered "thousands of bedbugs" living in the crevasse of a city bus seat. Come to think of it: Is Gritty a 7-foot tall bedbug???

UPDATE: The bedbug bus count is far higher than previously thought. According to Felix Olivia, a bus operator and union rep for TWU 100, 11 different drivers have reported bedbugs on their buses in the last three weeks—an "unprecedented" number, he says.

"It's never been this many buses in a short period of time," he told Gothamist. "We've never had a situation like this." Olivia added that he wanted to see better communication from the MTA, since some drivers still aren't aware of the mounting reports. As for what's causing the infestation, he says that's still unclear, but that the "general public" is likely to blame. We're still not sure what routes were affected, but will update again as soon as we find out.

#bedbug bus
#bedbugs
#buses
#enjoy
#MTA
#why god
Do you know the scoop? Comment below or Send us a Tip