A former member of an Albany-based self-help group says that she and other women were compelled to utter the words, "Master, please brand me, it would be an honor" before being branded.

According to the NY Times, a secret sorority was formed within NXIVM, a self-help organization with some influential followers, and women were branded as well as forced to offer "compromising material," ostensibly to prove their loyalty. The article described the branding process, "A female doctor proceeded to use a cauterizing device to sear a two-inch-square symbol below each woman’s hip, a procedure that took 20 to 30 minutes. For hours, muffled screams and the smell of burning tissue filled the room."

The former member, Sarah Edmondson, told the Times, "I wept the whole time. I disassociated out of my body." Other members also claimed knowledge of the apparently secret sorority: "Slaves added compromising collateral every month to Dropbox accounts, and a Google Document was used to list a timetable for recruiting new slaves, several women said."

In 2012, the Albany-based Times-Union investigated NXIVM, which was co-owned and led by Keith Raniere, a former multilevel marketing entrepreneur turned executive coaching and self-help guru. The Times-Union spoke to Rick Ross, a cult expert, who said, "In my opinion, NXIVM is one of the most extreme groups I have ever dealt with in the sense of how tightly wound it is around the leader, Keith Raniere."

Ross was asked to provide insight on David Koresh to the federal government during the height of the Waco situation and says Raniere shows characteristics similar to Koresh.

Like the infamous leader of the Branch Davidians, Ross said, Raniere thinks he knows a way to reorder human existence, believes he is on the cutting edge of the new wave of the future, has followers who see him as a savior and uses his position of power to gain sexual favors from women.

For more than a decade, Raniere has been surrounded by a group of adoring women. In the 1980s and 1990s, it's believed Raniere had sexual relationships with three underage women, according to Times Union interviews with those women and their close family members. One of the characteristics of cults commonly cited by experts is the predisposition of group leaders to use sex as a means of power and control. Ross, who had two mental health professionals review the NXIVM curriculum, said he believes followers of NXIVM undergo a "thought reform" or "brainwashing" and "the ability of people to independently think is largely compromised."

The Times-Union spoke to others who believed NXIVM was a cult, but added, "Not all experts agree on what constitutes a cult. Michael D. Langone, executive director of the International Cultist Studies Association, said cult is a subjective term and no clear diagnostic test is available. He did not express an opinion on NXIVM."

Raniere has repeatedly denied that NXIVM is a cult. The Times-Union reported at the time, "Robert Crockett, a lawyer for NXIVM, told a federal judge in [2011]: 'It's not a cult, it's not anything like Scientology,' — not that there is anything bad about Scientology, he added." The Times-Union article was preceded by a 2010 article from Vanity Fair, which wrote, "To family friends, Seagram heiresses Sara and Clare Bronfman are victims of a frightening, secretive “cult” called nxivm, which has swallowed as much as $150 million of their fortune. But the organization’s leader, Keith Raniere, seems also to have tapped into a complex emotional rift between the sisters and their father, billionaire philanthropist Edgar Bronfman Sr."

In 2014, NXIVM sued Times-Union investigative reporter James Odato; Vanity Fair reporter Suzana Andrews; and three others, accusing them of hacking into NXIVM's computer system. The lawsuit, which critics said would have a "chilling effect" on reporters, was thrown out in 2015, with a judge ruling that NXIVM had missed a deadline to file. 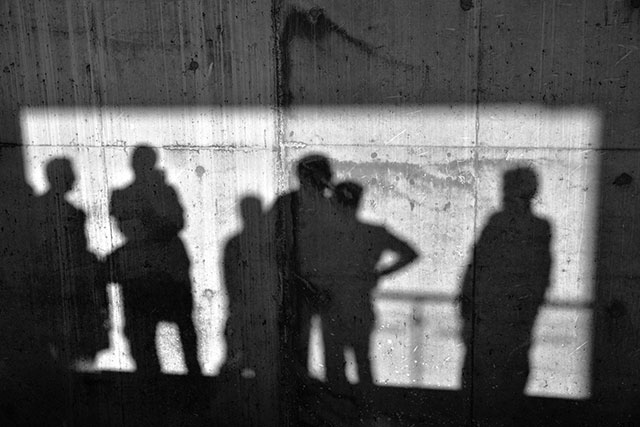 A group of people in shadows (Getty / istock)

“Lauren was someone I really looked up to as a rock star within the company,” said Ms. Edmondson, an actress who joined NXIVM about a decade ago.

During her visit, Ms. Salzman said she had something “really amazing” she wanted to share. “It is kind of strange and top secret and in order for me to tell you about it you need to give me something as collateral to make sure you don’t speak about it,” Ms. Edmondson recalled her saying.

The proposition seemed like a test of trust. After Ms. Edmondson wrote a letter detailing past indiscretions, Ms. Salzman told her about the secret sorority.

She said it had been formed as a force for good, one that could grow into a network that could influence events like elections. To become effective, members had to overcome weaknesses that Mr. Raniere taught were common to women — an overemotional nature, a failure to keep promises and an embrace of the role of victim, according to Ms. Edmondson and other members.

Submission and obedience would be used as tools to achieve those goals, several women said. The sisterhood would comprise circles, each led by a “master” who would recruit six “slaves,” according to two women. In time, they would recruit slaves of their own.

“She made it sound like a bad-ass bitch boot camp,” Ms. Edmondson said.

Edmondson and other women detailed

how they were supposed to "send their master texts that read 'Morning M' and 'Night M.' During drills, a master texted her slaves '?' and they had 60 seconds to reply 'Ready M.' Trainees who failed had to pay penalties, including fasting, or could face physical punishments, two women said."

The Times reports, "A copy of a text message Mr. Raniere sent to a female follower indicates that he knew women were being branded and that the symbol’s design incorporated his initials. 'Not initially intended as my initials but they rearranged it slightly for tribute,' Mr. Raniere wrote, ('if it were abraham lincolns or bill gates initials no one would care.)'"

Mark Vicente, a former top NXIVM official, told the Times he confronted Raniere about rumors of the secret sorority, "I said, ‘Whatever you are doing, you are heading for a blowup.'" He added, "No one goes [into the group] looking to have their personality stripped away. You just don’t realize what is happening."

In true "time is a flat circle" tradition, 10 years ago, the NY Post reported how Republican operative Roger Stone was hired by NXIVM in 2006: "Weeks later, two high-profile NXIVM devotees, Seagram’s heiresses Clare and Sara Bronfman, donated use of their private jet to the state Republican Senate Campaign Committee, records show. The next month, on March 16, the sisters gave $20,000 to the committee." NXIVM associates also reportedly donated $30,000 to Hillary Clinton's 2007 presidential campaign.

#Albany
#branding
#cult
#keith raniere
#nxivm
#self help
Do you know the scoop? Comment below or Send us a Tip