Attorney General Eric Schneiderman released his report [PDF] on Airbnb today, and if you live in Manhattan, some portion of it is guaranteed to piss you off.

The report states that 72% of the 497,322 Airbnb transactions the AG analyzed from 2010 through June of this year violate state law. This shouldn't be all that surprising, especially because the AG only looked at stays in which the host either wasn't present or was only present a portion of the time—bookings in which the host was present during the entire stay comply with state law.

What is more startling is the proportion of hosts who use Airbnb to run hotels, and its potential impact our anemic affordable housing market.

"Units booked on Airbnb as private short-term rentals for half the year or more—and thereby largely removed from long-term housing—generated 38 percent of all fees Airbnb received in 2013 in connection with the Reviewed Transactions," the report states.

Here's where these long-term listings are located. The darkest shaded regions have 21-24 listings. 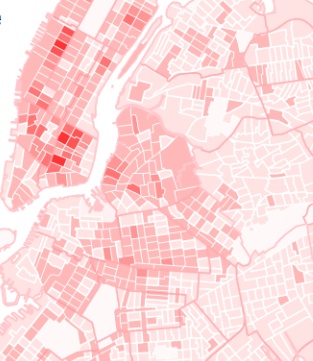 "It is no wonder that Airbnb fought to keep this data in the dark, because the picture it paints is clear: nearly three quarters of Airbnb's New York rentals are illegal, and commercial operators account for a large portion of its business," said State Senator Liz Krueger, who drafted the state's illegal hotel law in 2010 and has been critical of Airbnb.

"Airbnb's business model seems to be to ignore the law and spend huge amounts promoting slick ads and cherry-picked statistics, telling a story about their business that, at least here in New York, doesn't match the reality. In the long term, that just doesn't seem like an sustainable, ethical, or serious way to run a business."

And that cute New York Times profile of the Airbnb host in Queens who scores his guests concert tickets and offers them snacks? He's an anomaly. 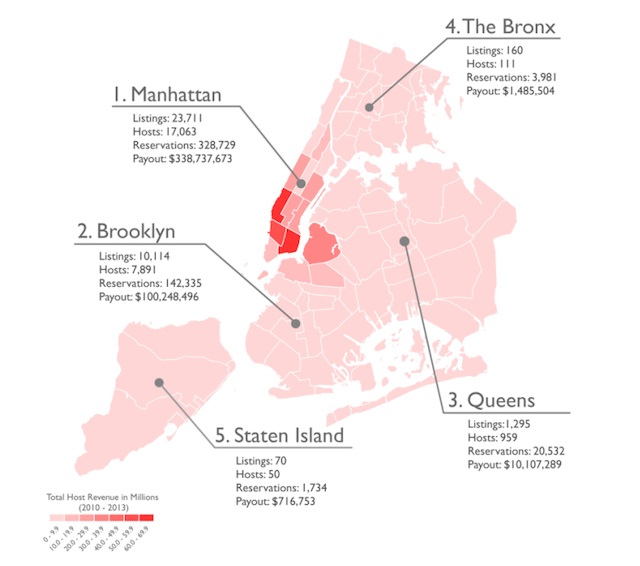 Listings in Manhattan and Brooklyn accounted for 97%—or $438 million—of citywide Airbnb revenue totals. Lower Manhattanites are taking a beating: the Lower East Side/Chinatown, Chelsea/Hell's Kitchen, and Greenwich Village/Soho account for one third of all the listings, and 41% of host revenue city wide ($186.9 million). The report helpfully points out that the Lower East Side is the fastest-gentrifying neighborhood in the city [PDF]. 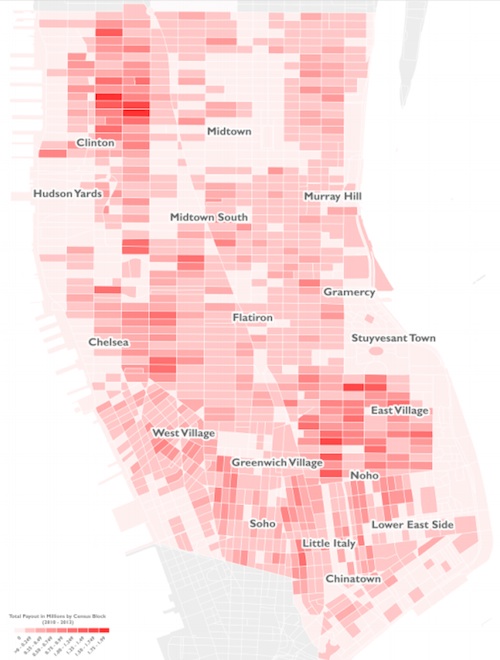 Where the Airbnb revenue lives

Papas told the Times, “Every single home, apartment, co-op and living space in New York is subject to a myriad of rules, so it’s impossible to make this kind of blanket statement. That kind of uncertainty and lack of clarity is exactly why we’re advocating for clear, fair rules for home sharing.”

The AG and City officials will also announce a joint effort to enforce the laws against illegal hotels. The AG estimates that Airbnb has cost taxpayers a little more than $33 million in hotel and occupancy taxes on the more than $500 million in revenue it generated from 2010 to 2014.

#affordable housing crisis
#airbnb
#eric schneiderman
#illegal hotels
#sharing economy
#original
Do you know the scoop? Comment below or Send us a Tip