Airbnb hosts in New York City who take advantage of the platform by illegally renting out entire apartments for at least three months each year took about 10% of the city's available rentals off of the market in 2015, according to a report [PDF] out this week from a duo of affordable housing nonprofits.

"Airbnb's own data demonstrates that the illegal short term listings of residential units on its site exacerbate the acute affordable housing crisis that plagues our city," said Marti Weithman, a supervising attorney for MFY Legal Services, which commissioned the study along with Housing Conservation Coordinators.

The report focuses on a subset of Airbnb listings that its authors argue are the most destructive to the city's dwindling affordable housing stock—those for entire apartments that are managed either by a host who rents multiple listings for at least three months out of the year, or a single listing for at least six months of the year. There were 8,058 so-called "impact listings" in NYC in 2015, out of 51,397 total.

Report authors pinpointed these listings using Airdna, an online Airbnb analysis tool that quickly identifies the number of days per year that a given listing is available for rental.

Impact listings ate up 10% of NYC's rental market last year based on the report's assumption that these units were all vacant rentals prior to being listed on Airbnb—an assumption Airbnb vehemently challenges.

But more than half of the impact listings identified were controlled by hosts with multiple units: a common indicator, local politicians and advocates argue, of an illegal hotel operation run by a landlord or third-party operator.

"NYC is overwhelmingly rental housing," added Weithman. "While there probably are some homeowners in there [among the impact listings], to the extent that there are, it's far less than the [number of] landlords."

This week's report also found that more than half of 2015 Airbnb listings, about 56%, violated the Multiple-Dwelling Law, which prohibits New Yorkers from renting out entire apartments for under 30 days at a time if the tenant on the lease is not present. This finding is in line with Airbnb's own December 2015 data dump.

At the neighborhood level, the report shows that impact listings are concentrated in Manhattan and Brooklyn, from 599 in the East Village to 105 in Fort Greene. The table below shows what percentage of potential rentals in these neighborhoods were lost to Airbnb. In Crown Heights, for example, Airbnb hosts allegedly withheld 12% of available rentals.

"Landlords will displace long-term families, only to operate illegal rentals or hotels," said Crown Heights Tenant Union organizing director Kerri White in a statement. "Today's report proves what we know from our experience in the neighborhood to be true." 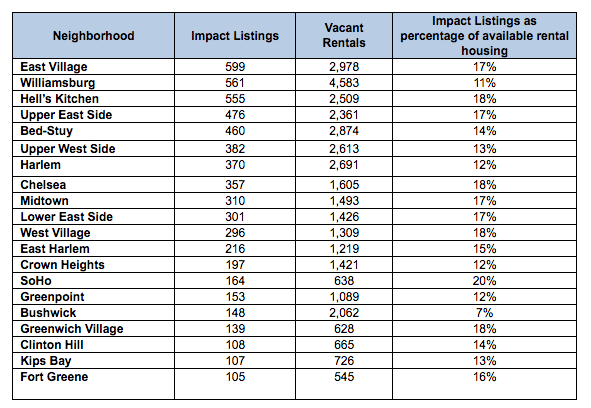 "We need to work together to find solutions that actually benefit middle class New Yorkers, including how to protect responsible home sharers, rather than protecting the interests of the hotel industry," he said.

According to the startup, 95% of NYC hosts have one listing on the platform, and three quarters of NYC hosts are low-to-moderate income.

But Airbnb has continued to criticize legislation aimed at weeding out bad actors, including a bill recently passed by the state legislature that would make it illegal not only to rent out your entire apartment, but to advertise such a rental online as well. Fines would range from $1,000 for the first offense, up to $7,500 for the third.

"Airbnb can criticize the report, but at the end of the day they are a corporation that needs to abide by the laws of New York State," said Weithman on Monday. "And thus far they have refused to do that."

Governor Cuomo will have the final word on the advertising bill before year's end. "This is one of 554 bills that passed both houses of the Legislature at the end of this session," said spokesman Rich Azzopardi on Monday. "They are under review by Counsel's office."