Faced with a dearth of detailed data on cycling fatalities in the U.S., The League of American Bicyclists conducted their own survey of 628 fatalities from February 2011 through February 2013 [PDF]. Their report finds that in 238 of those fatalities, 42% were a result of careless driving, 36% were hit and runs, and 12% were committed by drunk drivers.

This data jibes with what New York City has observed: dangerous driving is responsible for 70% of the pedestrian fatalities.

Of the 94 collisions in which cyclists were deemed to be at fault, 23% were riding the wrong way, 17% failed to yield, and 9% were riding on the sidewalk. 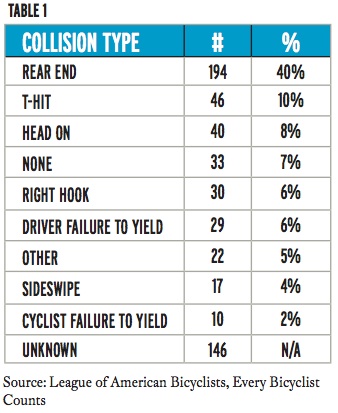 Most of the fatal collisions (44%) occurred on arterial roads with high speed limits. New York State fares better than most when it comes to the number of fatalities per 10,000 commuters. 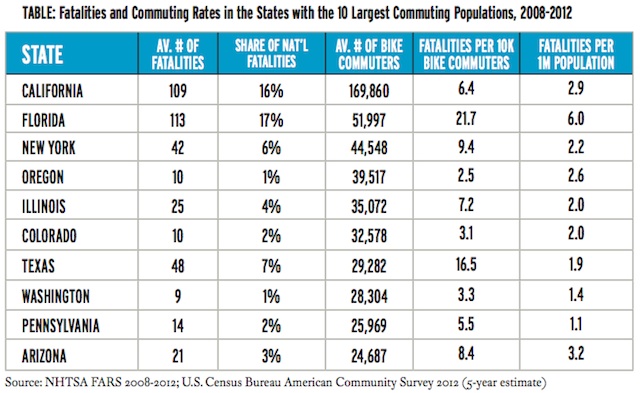 Only 150 of the 633 reports on the fatalities included information on whether the victim was wearing a helmet, but 57% of the 150 were wearing one.

Unsurprisingly, only 45% of the fatal crashes involved an enforcement action, and just 12% resulted in some criminal sentence. Drivers who killed female cyclists and cyclists between the ages of 20 and 30 were more likely to be punished.

Highway Safety Improvement Funds from the national DOT depend on data. "Without better data it's likely that non-motorized road users, including bicyclists, will continue to lose out on this federal funding source," the report states. "From 2009 to 2013 only 0.4% of available HSIP funds were spent on projects that promoted bicyclist and pedestrian safety—despite the fact that 15% of fatalities during that period were bicyclists and pedestrians."

#bike lanes
#cycling
#dot
#pedestrian safety
#vision zero
Do you know the scoop? Comment below or Send us a Tip