Report: 8 Of America's 10 Most Expensive Areas To Rent An Apartment Are In Manhattan

Eight out of the ten most expensive zip codes for apartment rentals in the country are in Manhattan, according to a new analysis of market data.

The report, by the listings site Rent Cafe, looked at market research compiled by the firm Yardi Matrix showing rents at buildings with more than 50 units in 125 major rental markets.

The most expensive zip code of all is Battery Park City, according to the study.

The results showed that on average, Battery Park City residents are paying $5,924 in rent. Current Zillow listings show three-bedrooms in the lower Manhattan development renting for $12,000 a month. The median rent is likely lower.

Here are the rest of the top 10 most expensive zip codes for rentals in the United States. 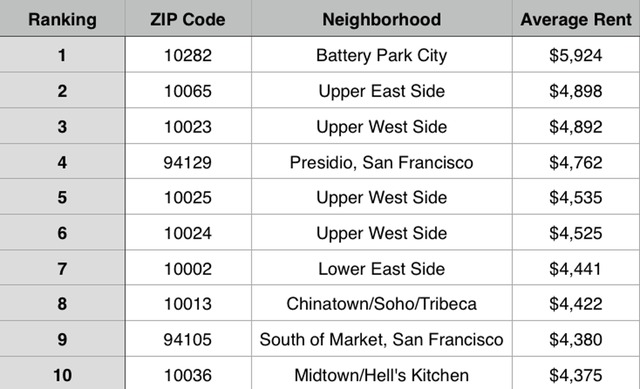 The Upper West Side hit a priciness Triple Crown by occupying three top spots, each entry encompassing a chunk of the neighborhood. Only San Francisco came close to matching the too-damn-high rent rates of New York's most famous island, notching a respectable two obscenely priced neighborhoods on the list.

The findings are somewhat in line with a recent Property Shark report on the priciest real estate sold in New York City in the first quarter of 2017. That analysis found that the most expensive neighborhood was Battery Park City's neighbor, Tribeca. Soho and Hudson square, part of the #8-ranked rental zip 10013, also placed in the priciest sales list. Unnervingly for Gothamist staffers who live across the East River, four of the neighborhoods with the biggest-ticket sales were in Brooklyn, including Manhattan Beach, where wealthy Russians are buying homes.

On the flip side of the equation, Wichita, Kansas is to affordability as New York is to stupefying spending, claiming 4 of the 10 cheapest zip codes in the country. Unlike some cities touted as affordable that in actuality are deeply impoverished, putting housing out of reach for most, Wichita seems relatively economically healthy, with a median income of $45,947, just $7,000 less than New York City's. New York's unemployment rate is the exact same as Wichita's, at 4.1 percent. Wichita's 67213 is on harder times, with a median income of $29,000 and a higher unemployment rate, but $407 a month still sounds like a pretty decent deal.

Hopefully this doesn't mean "Is Wichita the next Williamsburg?" trend pieces are just a few years away. But it does have a certain ring to it...