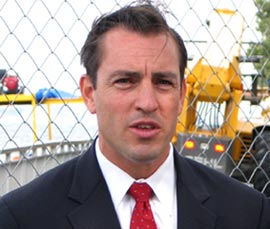 Vito Fossella, the lone Republican Congressional representative from New York City, was arrested early yesterday morning for driving while impaired outside of Washington, D.C. Fossella, whose activities leading up to the arrest are not known (his day events included the NY Giants' visit to the White House), issued this statement:

"Last night I made an error in judgment. As a parent, I know that taking even one drink of alcohol before getting behind the wheel of a car is wrong. I apologize to my family and the constituents of the 13th Congressional District for embarrassing them, as well as myself."

His blood alcohol content was not revealed, but he could be fined $250 and lose his license for a year if convicted. There may also be mandatory jail time of a few days. One of the two Democrats hoping to unseat him this election year, Steve Harrison, said, "Driving while intoxicated is a very serious crime. I hope this isn't true. If it is, he should seriously consider leaving Congress."

When the Daily News called Fossella's parents' house and told the elderly woman who answered about the arrest, she hung up the phone after saying, "Oh gosh! Goodbye!" Fossella, who represents Staten Island and parts of Brooklyn, is expected to give a press conference today.

And driving-related problems seem to run in the family: In 2006, Fossella admitted his brother was driving a car that almost hit two couples in Staten Island--John Fossella also allegedly got out of the car and chased the couples with a bat.

Update: Fossella's blood alcohol was 0.17-- more than twice the legal limit of 0.08 in Virginia.

#arrest
#Congress
#d.c.
#drunk driving
#politics
#staten island
#Vito Fossella
Do you know the scoop? Comment below or Send us a Tip