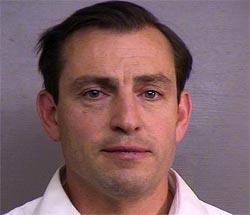 Representative Vito Fossella, who was arrested for a DWI outside of DC on Thursday, said, "This was an error in judgment. This mistake will not happen again."

The Republican congressman held a press conference yesterday, to face the media and apologize again for his arrest. While he did not go into the details of his arrest, the Alexandria, VA arrest warrant indicated his blood alcohol was 0.17--twice the legal limit--and the police charged him with "DWI as a first offense."

And per WNBC.com, a law enforcement source said Fossella was pulled over for running a red light. Additionally, per the Advance, Fossella apparently told the cop he was rushing to pick up his daughter to take her to the hospital, had initial trouble reciting the alphabet between D and T as requested, and swayed and stumbled when asked to walk.

Fossella explained (you can see a video here) he had been at a dinner for the Staten Islanders who attended the White House event honoring the NY Giants. He said he would not consider resigning, "The message that I have right now is the fact that even having one drink and getting behind the wheel is a mistake. Politics right now is the last thing on my mind. It's the embarrassment I have caused my family, my friends and the people of this community." Fossella did not answer a question about whether he would enter alcohol rehab. He may face at least 5 days in jail for a mandatory sentence.

Fossella is running for re-election this year, and one of his potential opponents, Democrat Steve Harrison, wasted no time criticizing Fossella's arrest, "Lawmakers cannot expect the people to follow the laws if they themselves disregard them." In the meantime, Fossella's Republican colleagues are supporting him; City Councilman James Oddo told the Advance, "He is my friend ... and I stand with him during the good times and I stand with him during the difficult times."

#arrest
#Congress
#d.c.
#drunk driving
#politics
#staten island
#Vito Fossella
Do you know the scoop? Comment below or Send us a Tip