Renters And Hotel Guests Not Getting Along In Burg 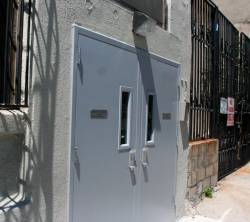 Williamsburg's Hotel Toshi has been making headlines recently, and today the half hotel/half residential building is back in print, with word that residents are tired of sharing the space with guests who have a penchant for late-night partying.

According to the Brooklyn Paper, the hybrid is losing some long-term renters who fear what they'll come home to at their South 5th and Driggs abode. One tenant told the paper, “When I come home at 1 am by myself, I am thinking what if I get mugged in my own elevator?” The building’s owner, Shlomo Karpen, has been accused of keeping the building’s side door open, and renting rooms for private parties.

However, Hotel Toshi President Robert Chan claims his staff has put the kibosh on loud all-nighters. He also says, “We have a 24-hour superintendent. We serve the whole building. We clean the whole building. When I run a building, I think I do an OK job.” We dropped by earlier and found the "Hotel Toshi" paper signs that are usually taped the door have been taken down, and some light handiwork was being done.

Still, the building has yet to be raided, as hostels in the neighborhood have been recently, and Chan says what they're doing is legal. Some confusion remains as to whether or not that is accurate, but as the paper notes, "it’s difficult for the city to crack down on hotels in residentially zoned buildings, thanks to a 2009 Appellate Court decision that ruled that a hotel is legal if a majority of single-room units in a building are leased to tenants for a period over 30 days a month." Rumor has it that even if the tenants flee, they'll keep operating as-is, because they might just be making more off their guests than off their long-term leasers.

#brooklyn
#driggs
#Hostel
#hotel
#Hotel Toshi
#residential
#South 5th
#williamsburg
Do you know the scoop? Comment below or Send us a Tip
A new Gothamist is coming! We’ve moved comments over to our beta site. Click here to join the conversation and get a preview of our new website.