A group of rent-stabilized tenants in the Lower East Side and Williamsburg are accusing their landlord of continuing with eviction harassment, illegal overcharges, and preferential rent hikes—despite New York's recently passed rent reform laws.

On Wednesday, roughly 50 people, many of them holding signs written in Chinese, gathered in front of Chinatown-based property owners Eric and Wayne Chan’s office as part of a tenant rally. According to the Chinese Staff and Workers Association, an activist and tenant advocacy group, they own over 20 buildings across the city.

The protest was the latest sign that despite the landmark passage of stronger protections for rent-stabilized tenants in June, many residents are still grappling with many of the same problems, ranging from bad housing conditions, harassment, and steep rent increases, that the new laws were designed to address.

Many of the tenants at the rally said they received preferential rent, an amount lower than the legal maximum rent as determined by the state. In the past, landlords could raise the rents of preferential rent tenants to the maximum allowable during lease renewals. But under the new laws, the increases are now limited by those set by the Rent Guidelines Board, the agency that sets rent increases for rent-stabilized units.

Some organizers have said landlords have been targeting preferential rent tenants with large rent increases in hopes of pushing them out. Under the law, preferential rent can be eliminated if the tenant moves out.

The Lower East Side tenants have a history with Wayne Chan. Back in 2017, he tried to evict tenants at 231 Henry Street through a proceeding in housing court known as a holdover, an aggressive tactic in which landlords charge tenants with breaking rules in their leases.

At the time, Chan argued that the building was in fact not rent-stabilized because of significant renovations he had made, according to court documents. Under the law, a landlord seeking to destabilize a building must prove that they have rehabilitated at least 75 percent of the building. Ultimately, a state Supreme Court judge in the Appellate division said Chan did not provide sufficient evidence to show that such work was done and denied the holdover eviction.

Chan did not respond to a request for comment. 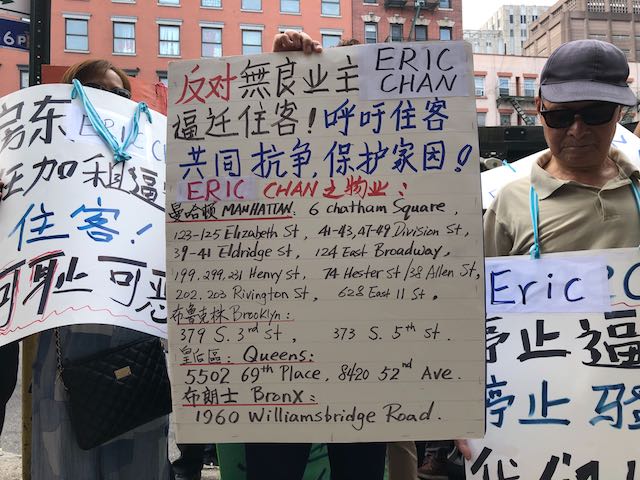 A tenant holds up a poster in Chinese. (Adwait Patil / Gothamist)

One tenant, Huang, who asked not to use his full name, said he has lived in the building for 25 years. Over that time, he had seen his monthly rent nearly double, from $890 to $1,737.

“He’s trying to drive us away,” he said.

Kimberley Ramirez, 13, who lives at 371 South Fifth Street in Williamsburg, spoke of deteriorating conditions in her building. “There was mold, roaches, rats and leaks. For four years the tenants upstairs have had no heat," she said. "And the landlord raised the rent on all of the families who live there.”

Zishun Ning, an activist at Lower East Side Organized Neighbors, said even with the new regulations, landlords still have great incentives in pushing out tenants because development pressures have not gone away.

"We have seen these things going on across the city," he said. "Landlords will try to still harass tenants because it's in their interest to make a profit."

Many of the Lower East Side tenants do not speak English, and they have had trouble understanding the leases and documents sent by the landlord, according to Ning. Wednesday's rally used the services of a translator.

Early on, one tenant at 199 Henry Street, who spoke up and identified herself as Ling, noted with irony, "The landlord is Chinese, but he wants to kick out Chinese."

She then added: "This is really shameful."

UPDATE: An earlier version of this story miscalculated the percent increase of the Ramirez family's rent and the timing. It was a 20 percent jump. The rent increase was made two years ago.

#landlord harassment
#preferential rent
#rent laws
#tenant protest
Do you know the scoop? Comment below or Send us a Tip