"There is this perverse self-flagellation that Staten Islanders do," said Oddo at the time. "They love to think of themselves as the 'Forgotten Borough.' But this is not an excuse for apathy."

Rendering of 40 Minthorne Street by Amie Gross Architects (via)

Gary C. Angiuli, the developer and owner of a block-long warehouse at 40 Minthorne Street in Tompkinsville (which currently houses Flagship Brewery) is now echoing that sentiment—the Advance reports that he's hoping to turn the (rather small) block that runs the length of his 33,000-square-foot warehouse into Staten Island's next "hot spot."

Like moths to a flame, and tourists to the New York Wheel, Angiuli is hoping to draw "artists" to his warehouse, a ten-minute walk from the ferry terminal and even closer to the Tompkinsville train station. 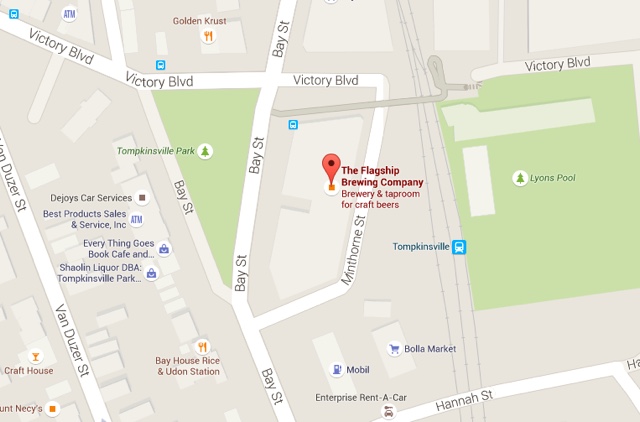 "Because of the unique location, which includes the train station and parking on an off-the-beaten-path side street, I think this will be a place where young people—especially the artist population and musicians—congregate in the same way they might in a place like Williamsburg, Brooklyn," he told the Advance.

The borough's third DaddyO's BBQ will reportedly open inside the warehouse by early 2016, leaving Angiuli with 10,000 square feet of retail space that he hopes to rent to about 20 small shops at "about half" market rate. Ideally, Angiuli said in January, "art galleries, crêperies, interesting coffee concepts, performance space and boutiques" can be expected. That, and a massive mural facing Victory Boulevard, which recalls when Coney Island pulled a Williamsburg with Smorgasburg.

But how will we refer to this mini-Billyburg across the water? Angiuli initially played around with "Back of the Bay," telling reporters, "It's a play on words from 'Meet me at the back of Bay (Street).'" But the Realness-seeking developer has since changed his mind. "We decided we wanted the name to be more authentic, so it's just being branded as Minthorne Street," he said.

Minthorne Street, Bedford Avenue, whatever. "The goal here is to take a page out of the Williamsburg playbook and do something really authentic," said the real estate developer.

By
Louis C. Hochman
Newark Liberty Airport ties its record for most guns found in a year — with a month left in 2022
By
Rosemary Misdary
After Santa gets moving, workers start cleaning tons of Macy's Thanksgiving Day Parade trash
By
Rosemary Misdary
A new council aims to improve literacy in city schools
By
Jessica Gould
Get the news New Yorkers need in your inbox