Remember when Governor Cuomo announced plans to close roughly 30 MTA stations for months at a time, as part of a 21st Century facelift bringing better lighting, digital signs and an overal "modernized look and feel" by the year 2020? Today the Governor Who Poses For Photo Opps In The Subway addressed those promises again, unveiling new renderings of what, as MTA President Ronnie Hakim put it, a "modernized passenger experience" might look like. In many of the renderings, commuters are either hunched over their phones or staring at a digital subway map.

"The great challenge is operating a system while you're rebuilding it," Cuomo told reporters on Monday. "In the past, the MTA has operated [the system] and patched it. This is not a patch job. Patch jobs are a waste of money."

In addition to new lighting, Hakim detailed that new station entrances (goodbye green globes) will have "street-level service announcements, so customers will know, before they enter, what the service level is on a particular line."

She also reiterated the need for "better wayfinding," which seems to amount to more intuitive signage. At MetroCard swiping stations (which will be passe soon, anyway) steel bars will be replaced with glass barriers—according to Hakim, "an important aesthetic." And platforms will be equipped with "leaning benches," strange wall-bench hybrids that seem to facilitate iPhone-scrolling.

The first three Requests for Proposals (RFPs) will go out this week, for the Prospect Avenue R station in South Slope, the 53rd Street R station in Sunset Park, and the Bay Ridge Avenue R Station in Bay Ridge.

Contracts are expected to be awarded this fall, and station closures won't exceed six months, according to the Governor's office. The remaining 28 contracts will be awarded over the course of the next 12 months. 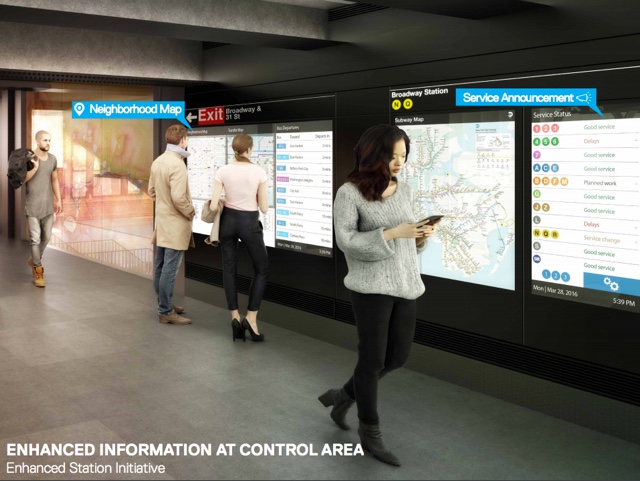 Governor Cuomo also issued an update on the MTA's interconnected "Human Centipede" subway trains on Monday which, last we heard, would only account for ten of the 940 new cars outlined in the long-delayed 2015-19 Capital Plan. Now, Cuomo says, that order has been re-upped significantly—out of a total 1,025 new subway cars, "up to" 750 will have the open-ended design.

Calling the connected subway car design an "a-ha moment," Hakim said that the new cars will allow more commuters to fit onto each train, where they'll be able to "freely traverse the length of the subway car."

Of course, as we observed last year, when all of the subway cars are connected, every car is a poop car.

An RFP for the design of these cars will go out this week. AMNew York reports that the first open ended train cars will serve the A line. Approximately 275 new conventional cars will be distrubuted between the subway and the Staten Island Railway. 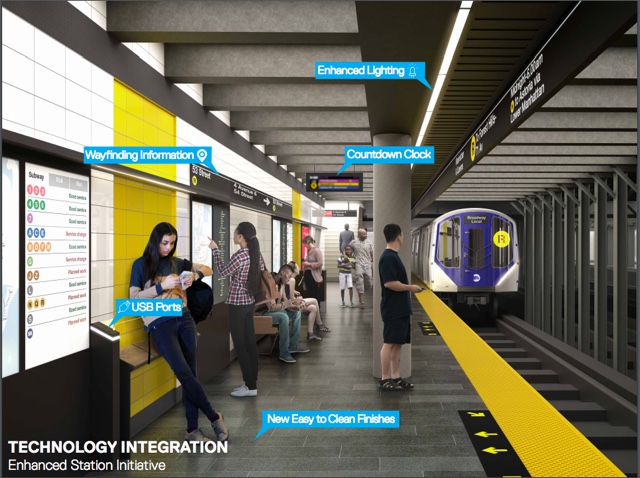 "My daughters were home for the weekend," Cuomo said on Monday. "They came up to Westchester and I got the lecture about the MTA. I keep telling them 'Call Tom [Prendergast, MTA Chairman], call Tom, leave dad alone.' It was about the crowding [on the subway]." (To be clear, 'Tom' relies on 'Dad' for his funding—funding that was withheld for a record number of months and still, advocates have pointed out, doesn't exist in any tangible form.)

The new cars will also have slightly wider doors—58 inches up from 50—which the MTA estimates could reduce "dwell time" at each station stop by as much as 32 percent. Like Cuomo's new "Ferrari-like" buses, these trains will be blue on the exterior with gold stripes, and equipped with WiFi and USB charging stations. Car windows will also be larger, and the headlights on the new trains will be LED. 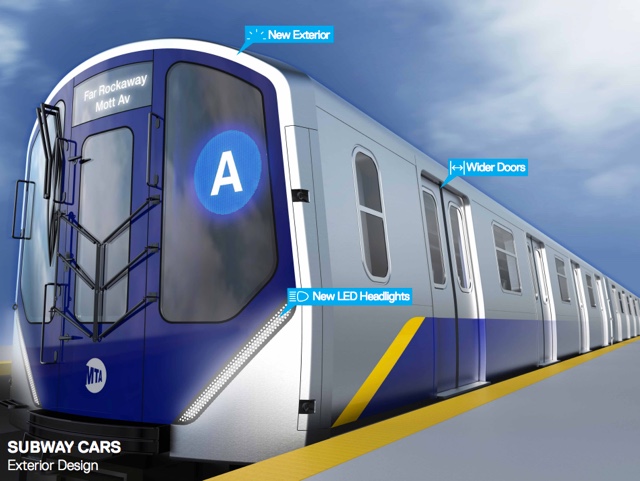 "People want to work, and they want their device to work 24 hours a day," Cuomo said. "They don't want to have to look up. There has to be WiFi, and there need to be charging ports."

On the inside of the cars, get ready for "full color digital customer information displays," digital ads to replace the old-fashioned kind, and lots of security cameras (the latter will be installed throughout renovated stations as well). Train doors will also be edged with lights that will flash green on the approach to a station, informing riders which side of the car to push towards to exit. 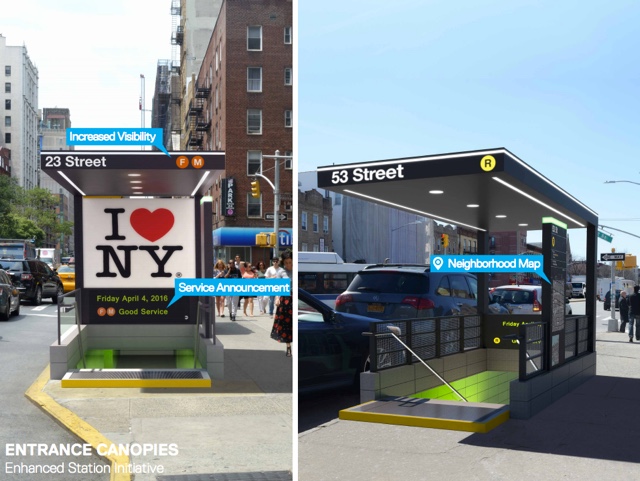 At the end of Monday's press conference, a reporter asked Cuomo if he believes the long-awaited Second Avenue Subway will be completed this December, in line with the MTA's promises. The new subway line, Prendergast has said, will go a long way toward alleviating crowding on the Lexington Avenue Line, which currently serves about 500,000 people a day.

"I'll tell you in November!" Cuomo quipped, adding that, "I've got a shovel in the trunk. If they get slow I can help."

John Raskin of the Riders Alliance, a nonprofit that has questioned Governor Cuomo's recent interest in the MTA, said the proof will be in the pudding.

"Governor Cuomo is stepping in personally, and promising these improvements for riders," Raskin said on Monday. "If he can really deliver, and people see service improve as a result, then I think riders will have a very different take on the governor's support for public transit."

The MTA did not respond to a request for comment on when the new centipede trains will roll out.

UPDATE [7/19]: This piece has been updated with information about where the new train cars will be distributed.

#governor cuomo
#human centipede train
#MTA
#subway
#subway renovations
Do you know the scoop? Comment below or Send us a Tip