Remy Ma's Getting Hitched on Rikers 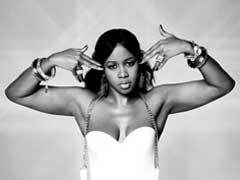 Remy Ma, who is possibly more famous now for what landed her in jail than for her music, is still managing to make headlines from behind bars. A little first-degree assault and weapons charges aren't going to stand in the way of her dream wedding, to be held later this month on a little island off the coast of the Bronx.

She and her beau, Brooklyn rapper Papoose, plan to get married on Rikers as she waits for the gavel to drop at her April 23rd sentencing. The couple could very well be celebrating their first 25 anniversaries with Remy still doing time. Is it unlikely there will ever be an offspring of the two rappers? While Rikers has no conjugal-visits, The Post notes that facilities like Bedford Hills Prison allow them after a 7-month waiting period.

The ceremony, of which there are about 200 a year at the facility, will be intimate -- only two guests are permitted. And don't expect any matrimonial bling, neither bride nor groom are allowed to wear rings with protruding gems.