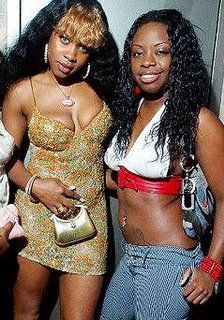 Today there's talk of the chaos that ensued after Remy Ma's sentencing yesterday. To recap, so far in this ongoing saga there's been an alleged theft, a shooting, a conviction, a Rikers Island almost-wedding, an attempted jail break, a sentencing...and finally, what is hopefully the last bit of drama: the courtroom outbursts.

The NY Times reports that Remy's sentencing went from emotional to violent as the judge sentenced her to 8 years behind bars. Just after the gavel came down, her fiancee Papoose (real name: Shamele Mackie), "flew into a rage, lunging and cursing at court officers, then overturning a garbage can near the elevator banks." (Anyone else thinking Makeda Barnes-Joseph should be expecting a visit from Papoose?)

Prior to that, inside the courtroom, Remy was called “an extremely angry young woman” by Barnes-Joseph, the victim. She added in her letter, read before the court, that "after July 14, I stopped existing as a person. I am now known as a victim, a gold-digger, a groupie, a liar and thief. I will always be the girl they will whisper about. I will always be the girl who was shot by Remy.” The rapper had her own emotional statement, however, and some believe it got what was reportedly going to be a 13-year sentence, down to 8 years.

She excoriated some of the reporters who covered her trial for calling her a “hip-hop hellion,” saying her aggressive stage persona was precisely that: a “music industry creation” and “a facade. Remy Ma is not even close to who I am,” she said through tears. “I’m not a thug. I’m not a hardcore anything. I have feelings and emotions, and I’m a human being like anybody else. I’m Remy Smith.”

“I apologize,” she said, “and I’m sorry for not saving you. I feel so bad for all the physical and mental pain you went through, and go through. Myself, I have a lifetime scar on my face. So I know the pain you feel when I look in the mirror.”